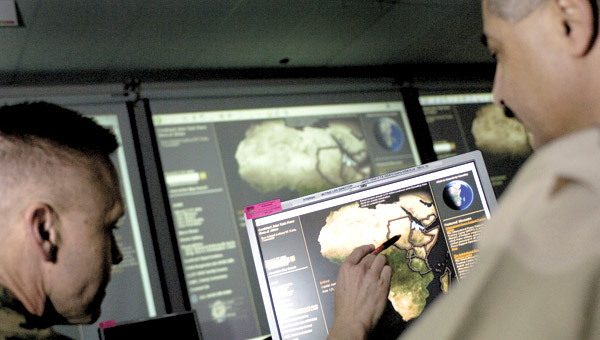 Two employees at JFCOM look at a map of Africa.

Taxes, jobs are at stake with JFCOM

Complete closure of the U.S. Joint Forces Command could cost the city as much as $4 million in tax revenue, according to a staff report presented to City Council Wednesday.

The council also passed a resolution requesting that President Barack Obama reject a recommendation from Defense Secretary Robert Gates to close the command, largely located in Norfolk and Suffolk.

“Our staff has been on top of it,” said Mayor Linda T. Johnson. “We’re not running any white flag up. It’s just not an acceptable outcome, in our opinion.”

According to Kevin Hughes, who presented the staff report, the city manager organized an internal team on Aug. 9 to respond to the potential impact of the closure. The economic development department also began holding one-on-one meetings with affected businesses, like hotels and restaurants, to understand the effects on the surrounding community. In addition, Suffolk organized a roundtable discussion with representatives from modeling and simulation contractors in the area.

The city manager and mayor also have participated in meetings with Congressman Randy Forbes and others.

Hughes also reported the early results of a survey sent to area modeling and simulation contractors. At least 15 Suffolk-based contractors said they work with the military command, employing at least 2,000 people among them. They estimated about 70 percent of their work is tied to JFCOM, and about 30 percent of their employees reside in Suffolk.

Managers of nearby hotels estimated about 80 percent of their business is generated by JFCOM and the Suffolk-based contractors, Hughes said.

Councilman Robert Barclay said city staff members had been keeping council abreast of all the developments.

“We’ve been kept very well-informed of the process,” he said. “There’s not going to be any one magic bullet that resolves the problem.”

Hughes said the city’s administration is ready to fight the recommendation.

“It is very difficult to put our arms around this,” Hughes said. “We’re obviously concerned about this and working to put up a good fight.”

Suffolk City Council on Wednesday voted 5-3 to recommend a site in the Holland village for a new elementary school... read more