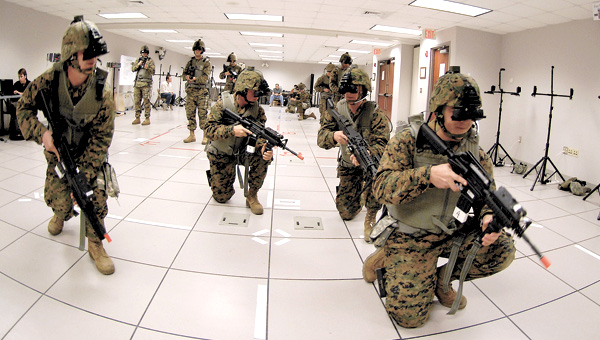 Simulation center: Marines from the 2d Battalion, 8th Marine Regiment, train with the Future Immersive Training Environment (FITE) Joint Capabilities Technology Demonstration (JCTD) virtual reality system in the simulation center at Camp Lejeune, N.C. Sponsored by the US Joint Forces Command (USJFCOM), with technical management provided by the Office of Naval Research (ONR), the FITE JCTD allows an individual wearing a self-contained virtual reality system, with no external tethers and a small joystick mounted on the weapon, to operate in a realistic virtual world displayed in a helmet mounted display.

All four of Suffolk’s neighbors to the east approved resolutions with a similar purpose to the one Suffolk approved last week. Adopting the resolutions and sending them to the White House was one step proposed in a roundtable meeting among elected officials last week to attempt to save the region’s jobs.

Defense Secretary Robert Gates has recommended the closure of the command, along with a number of other measures, as cost-saving initiatives for the nation’s military.

Wednesday, Suffolk sent an email update on the JFCOM situation to those signed up to receive its monthly newsletters. The update was similar to a presentation given at last week’s City Council meeting by Economic Development director Kevin Hughes.

According to the newsletter, the closure of JFCOM could cost the city up to $4 million in lost tax revenue. In addition, the early results of an industry survey indicate that at least 15 Suffolk-based modeling and simulation contractors work with the command, and those contractors employ roughly 2,000 people. Of those, an estimated 600 employees live in Suffolk.

For hotels near JFCOM, the situation looks even bleaker — managers estimated at least 80 percent of their business is generated by JFCOM or Suffolk-based modeling and simulation contractors.

According to Hughes, the city manager organized an internal team on Aug. 9 to respond to the potential impact of the closure. The economic development department also began holding one-on-one meetings with affected businesses, like hotels and restaurants, to understand the effects on the surrounding community. In addition, Suffolk organized a roundtable discussion with representatives from modeling and simulation contractors in the area.

The city manager and mayor also have participated in meetings with Congressman Randy Forbes and others.

“Our staff has been on top of it,” Mayor Linda T. Johnson said at last week’s council meeting. “We’re not running any white flag up.”

Hobson event not shut down