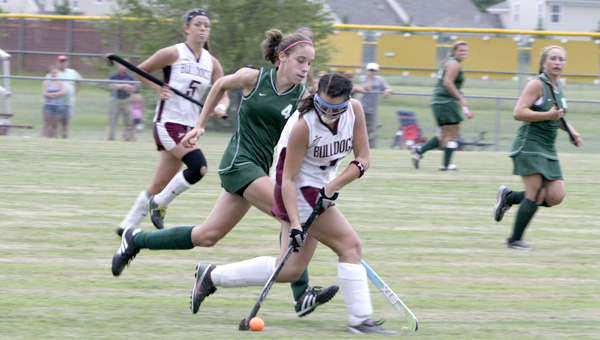 In the season-opening field hockey match for both teams, neither King’s Fork nor visiting Great Bridge created many scoring opportunities.

Thanks largely to the speed and passing by Great Bridge midfielder Meghan Gill, the Lady Wildcats converted two of their few attacks into goals and that was the difference for Great Bridge’s 2-0 win.

Great Bridge built its lead in the first 20 minutes of play. Fifteen minutes in, Gill drove into the right side of the King’s Fork scoring arc. Nearing the endline, she sent a sharp cross across the goalmouth and Abbey Meyers scored, needing only to tap the ball into the unguarded cage.

Five minutes later, Gill practically repeated the play, but this time finding Sarah Kneemiller moving in on the center of King’s Fork’s goal for an easy finish.

For the final 40 minutes of play, the Lady Bulldogs played long stretches of action in the Great Bridge end of the field.

“We’ve got to learn to play consistently throughout the entire game,” Nicholoff said.

Once behind, the Lady Bulldogs turned up the speed all over the field. King’s Fork earned a couple penalty corners in the final few minutes of the first half and repeated such flurries in the Great Bridge arc a couple times in the second half. It wasn’t enough though to find a goal.

“We were outplayed in the first half. We didn’t play up to the level we can play. After halftime, we picked it up. We did a better job playing our game,” Nicholoff said. “The main thing is we’ve got to have more intensity throughout the game.”

Nicholoff is King’s Fork’s third head coach in three field hockey seasons. She comes to the Lady Bulldogs after being a four-year starter and two-time NCAA Div. III All-American at goalkeeper at Washington College.

Next up for the Lady Bulldogs is a non-district match against visiting Churchland Tuesday at 5:15 p.m.