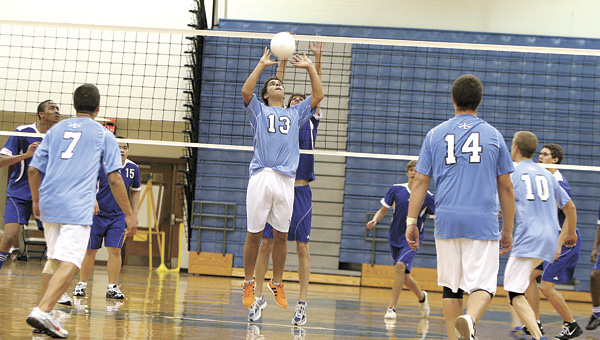 Winning totals: Lakeland’s Mike Estienne totaled 40 assists and six kills Thursday as the Cavaliers won at Oscar Smith in four sets to start their season. The Cavaliers beat the Tigers 25-22, 19-25, 30-28, 25-23.

Perhaps the best sign of the season-opener for head coach Daniel Waller though, was when his Cavaliers got big points, especially in sets three and four, from Dondre Jordan and Tyler Mizelle.

Jordan’s in his second year on the squad and Mizelle’s in his third season, but both are now elevated into the starting lineup for the first time this season.

“They both picked it up near the end of the match and that’s really what saw us through,” Waller said.

After the Tigers won the second set and kept rolling in getting out to a 12-7 lead in the third set, the Cavaliers worked their way back.

The Mike Estienne to Taylor Bess combination was a good one most of the way and Bess put down a kill to put Lakeland up 19-18 in the third set.

Ben Johnson’s ace made it 27-26 Cavaliers and the sides traded points until the Cavaliers finally claimed the set. A Bess spike made it 29-28 and an Oscar Smith error gave Lakeland the final point.

Lakeland fell behind again starting set four until a 5-0 run on Jordan’s serve, with a couple aces from Jordan, made it 9-8 Lakeland.

It was a narrow lead most of the way, but the Cavaliers held onto the lead until the Tigers ran off three straight points to tie the set, 23-23.

The Cavs went to Mike Estienne setting up Bess for a kill to retake the lead and a Tiger hit going out of bounds ended the match. In the last set alone though, Jordan came up with three aces, two kills and a block while Mizelle got five of his nine kills down the stretch.

“The only negative that bothers me is we missed too many serves,” Waller said. “Oscar Smith battled hard.”

The Cavaliers (1-0) had to fight from behind in all four sets. In the opening set, a 9-1 Lakeland run turned around a 20-15 Oscar Smith lead. In set two, the Tigers led by as much as 17-5 and the margin was too much for the Cavs to erase.

In the opening set, Lakeland put together a 5-0 run to get within 14-12, but no closer. In the second set, Lakeland briefly led at 15-14 before Oscar Smith rolled off six straight points.

The Lady Cavaliers made a 7-0 run to cut a big Oscar Smith lead down to 20-18 late in the final set, but Oscar Smith closed out the match from there.

Cheyenne Eure had 10 assists and Tashah Woodus had three kills and three blocks for Lakeland (0-1).