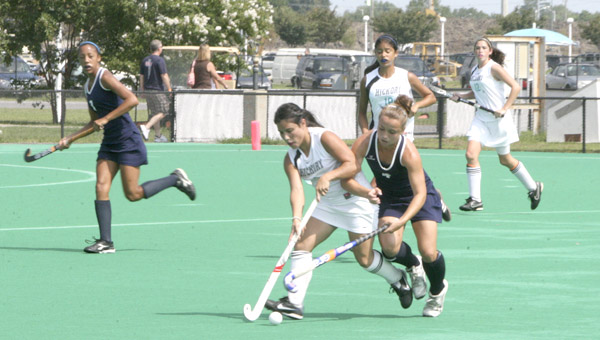 Field fighting: Lakeland’s Jamee Albright fights for the ball against a Hickory player Saturday during Lakeland’s 7-0 win in the semifinals of the Salem Invitational Tournament.

Young was the lead goalscorer and with her three tallies coming in an 11-minute span, she had put away eight goals in Lakeland’s first three matches in the Salem tourney at the U.S. Field Hockey National Training Center. Senior midfielder Kelsey Smither was the Lady Cavs’ consistent playmaker. With a goal and three assists against Hickory, Smither had three goals and seven assists in the three matches.

Hickory came close to getting the opening goal of the game. In the fifth minute, a counterattack by the Lady Hawks and scramble in the Lakeland arc was turned away only by defender Olivia Graham volleying a waist-high shot away from Lakeland’s cage.

Three minutes later, the Lady Cavs got going with a well-run play from a penalty corner. Jennifer Hedrick passed the corner to the top of the Hickory arc. Megan Johnson stopped the ball, setting it up for Smither to blast a shot into the Hickory goal, despite the Lady Hawk keeper getting a pad on the shot.

By number of shots and controlling play, Lakeland’s had plenty of halves that were more impressive. The Lady Cavs simply took advantage of nearly every offensive chance and raced out to a big lead anyway.

In the 12th minute, Young redirected a hard shot by Kendell Combs for a goal. Combs and Smither put on a dribbling clinic to set up the play in the Hickory arc before Combs’ shot toward the right post and Young being there to put the ball in.

Less than two minutes later, Young scored off a pass by Brittany Milteer. Lakeland finished another set play from a corner, with Combs deflecting a Smither drive for a goal in the 20th minute.

Smither and Young combined with just under three minutes left in the half, with Smither passing from outside the right side of the Hickory arc to Young near the penalty spot. In one motion, Young pivoted toward the cage and swept a one-time shot into the goal, making it 5-0 Lady Cavs. Lakeland scored on five of six shots on goal in the first half.

Goals by Combs and Kasey Smith completed Lakeland’s 7-0 margin in the second half. The Lady Cavaliers converted 3-of-9 penalty corners into goals and finished with a 17-2 advantage in shots on goal.

The Lady Cavaliers (4-0) advanced to the final match of the 16-team tournament Saturday evening.