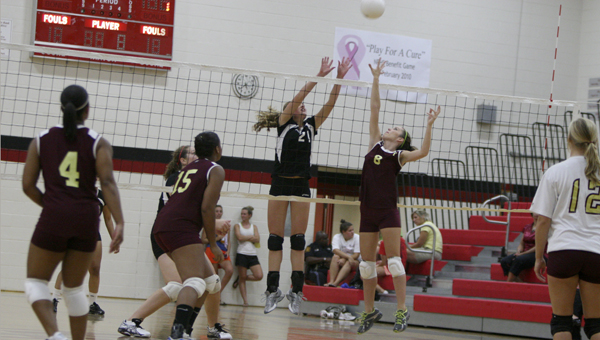 Despite persistence by both King’s Fork squads, Nansemond River won both ends of a volleyball doubleheader, with the Lady Warriors getting their first victory of the season, Monday evening at Nansemond River.

The Lady Warriors (1-2) took the first two sets, but by different routes. In the opening game, NR got out to a 7-1 lead and then ran off seven straight points on Courtney Lowers’ service to go to a 16-5 margin.

In set two, the teams traded runs and a 6-2 Lady Bulldog spurt made it 15-12 KF. On the longest rally of the match, KF’s Whitney Nichols spiked four shots down and the fourth finally went for a kill and a 17-15 KF lead.

The Lady Warriors won 10 of the last 12 points in the set, with another long serving stretch by Lowers included.

Midway through set three, another Lady Warrior run, a 7-2 rally to take a 19-17 lead, seemed as it would decide the match.

The Lady Bulldogs answered this time. Three straight KF points made it 23-22 KF and a kill by Nichols made it 24-23 KF.

The Lady Warriors had a match point at 27-26, but three straight serving or hitting errors by NR gave KF the set.

King’s Fork, mainly with Nichols and Crystal Collins getting kills, kept momentum on its side to a 17-14 lead in the fourth set.

The Lady Warriors didn’t take the lead for good until Lowers came up with a block and kill on back-to-back points for a 23-22 NR lead. Lowers got a kill for 24-22 and a KF error ended the match.

Considering the Warriors were inches from a regional tournament spot while the Bulldogs won three matches last season, the Warriors had to sweat out their victory in the boys match.

The Bulldogs led 24-20 in the opening set but couldn’t find one more point to claim the set.

Zack Vann had a kill and an ace and Hayden Champigny made two blocks to fight off the four set points. King’s Fork had another chance at 26-25, but a Bulldog error saved NR. Vann put down a kill to give NR a 28-26 win.

The Warriors (2-1) led all the way after jumping out to a 9-3 lead in the final set. Vann led NR with three kills in the last set and finished with 10.

Josh Howard had 27 assists and eight aces. Champigny had nine kills and seven aces. For KF, Lee had six aces and Zach Johnson had six kills.