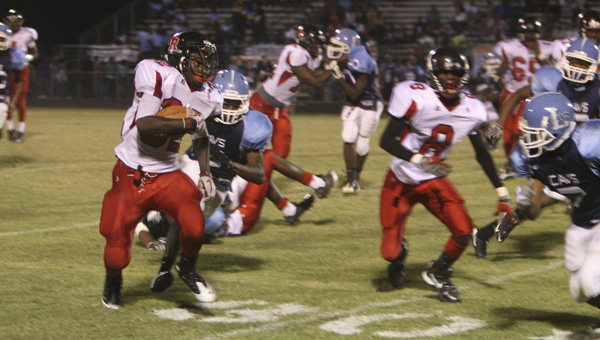 Nansemond River intercepted three Lakeland passes and relied on junior running back Lamont Brown to eat up yardage and the clock for a 14-6 win over Lakeland Friday night at Cavalier Park.

The win was the first for the Warriors over Lakeland since 2006.

Brown carried 31 times on the night and the slight, shifty back, who’s already a three-year varsity veteran for Nansemond River, was just as strong at the end of the game as he was in the first quarter.

The first stages of the game went according to plan for the hosts, who defeated their city rival 43-15 last September.

After forcing a Warrior punt and taking over on the Warrior 42, Lakeland gained the lead without a problem.

Walter Boykins and Jaquan Demiel connected on a screen pass for a 25-yard gain. On 4th-and-2 at the NR 9, Raekwon Johnson powered through the line for eight yards.

On the next snap, Boykins ran a quarterback sneak in for the touchdown. The Warriors blocked the extra point, leaving the score 6-0.

The Warriors answered with a good drive, mainly with Brown carrying the load, but the Warriors came up short on a fourth down play inside the Cavalier 20.

While the Warriors still weren’t on the scoreboard, the remainder of the first half was played in Lakeland territory.

A Warrior drive midway through the second quarter reached 1st-and-goal at the 1 after an 11-yard run by Brown only for the Warriors to fumble a handoff on the next play. Lakeland’s Kyle Jones fell on the ball and saved the Cavaliers, at least for a few more minutes.

Nansemond River kept the Cavalier offense pinned in, forced another punt, and took over at the Cavalier 34 with 1:43 left in the half.

On 3rd-and-7 from the Cavalier 8, Justin Anderson rolled out to his right looking to throw into the end zone. Instead, he kept the ball and scrambled, diving over the goal line for the touchdown. A successful kick by Logan Woolston gave NR a 7-6 lead with 0:10 left in the half.

“It gave us confidence but we knew the game wasn’t not over. We have to be a full-time team. At halftime, the game was 0-0 and we knew it would be a new game after that,” said Warrior captain Shannon Evans.

The Cavaliers gained yardage and had promising field position throughout the second half, but turnovers and penalties were too much to overcome for the second straight game.

Gary Brooks intercepted Boykins on Lakeland’s first play of the third period. It was Brooks’ second pick of the game and it set the Warriors up near midfield.

Brown got the ball on six of NR’s first seven plays, steadily marching the Warriors to the Lakeland 25.

Anderson passed to tight end Willie Gillus for a 14-yard gain. On 1st-and-goal from the 8, Brown rushed off left tackle for the touchdown. Another Woolston kick made it 14-6 NR.

While nearly 19 minutes remained, Lakeland got the ball for only three more possessions.

Even when the Warriors gained only one or two first downs, they were still taking big chunks of time off the clock.

Tiron Smith’s interception ended one Lakeland drive to inside the Warrior 20. A fumble by Boykins, with NR’s Carl Williams scooping up the loose ball, ended another Lakeland drive. Defensive end Jalen Thrower made two sacks for the Warrior defense in the second half.

Brown finished with 89 rushing yards. Anderson was 4-for-4 passing for 36 yards and he ran for 41 yards. Anderson missed parts of the second half because of injury. Backup quarterback Alex Kase played all or part of three series for the Warriors.

“This is a great group of kids. With the hard work they’ve put in and the time they’ve given, they deserved this victory,” said NR head coach Tracey Parker.