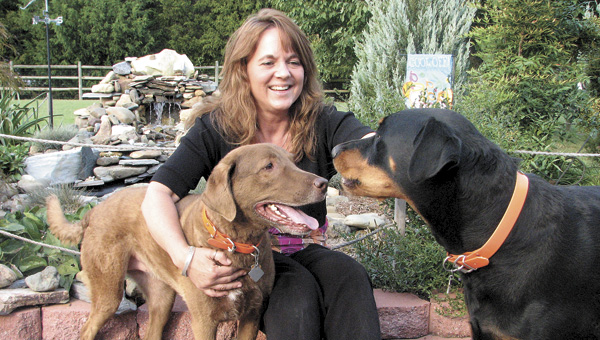 Sisters: Kody and Bonnee, pictured with owner Andrea Saunders, became two unlikely sisters after Kody was bought from a breeder and Bonnee was adopted from a rescue group.

Andrea Saunders and her husband did not intend to adopt dogs, but the couple has given a good home to two dogs that had the odds stacked against them.

When the couple met, he had Kate, a Chesapeake Bay retriever, and she had Siegan, a Doberman mix. Both had raised the pooches from puppies.

Within a few months of each other the two dogs passed away.

“It was heartbreaking for both of us,” Andrea Saunders said. “We’d both had them for so long, they were like our children. My husband and Kate were inseparable. She went everywhere with him. It took us months before we were even able to think about getting other dogs.”

About five months later, however, they brought Kody home.

Kody, short for Kodiak “because she looked like a little Kodiak bear,” Saunders said, was bought from a Charlottesville-area breeder.

After a few days, they noticed something with Kody was a bit off.

“I’d come home from work, drive up the gravel path, close the car door, unlatch the gate, call her name, and I was always afraid she’d gotten out because there was no barking or anything,” Saunders said. “But she would just be curled up sleeping.”

They soon discovered Kody was deaf.

It wasn’t long, however, until Andrea’s aunt showed her a photo of a Doberman mix in a South Carolina rescue shelter.

“I was a little leery about adopting a dog of that size from a rescue group,” Saunders said. “We’d adopted smaller dogs when I was a kid, but I wanted to know the background and everything about the dog.”

Her fears were soon put to rest.

“The rescue group exceeded my wildest expectations,” Saunders said. “They were knowledgeable about her temperament and everything. We were a little worried introducing the dogs to each other, but we did so slowly, and now they’re like sisters.”

Bonnee has turned into a daddy’s girl, and Kody shadows Andrea around the house.

Together, the two dogs sleep in the same house, and Kody follows many of Bonnee’s cues.

“She can tell when Bonnee hears something or responds to someone at the door,” Saunders said. “We’ll come home and Kody will be asleep curled up in the back of the dog house with Bonnee laying in the doorway, her two paws sticking out the front. Then, Kody will come out, ready to play and Bonnee just wants to relax. It’s almost like she’s been relieved of duty.”

Having experienced the rewards of adopting an animal, Saunders said she wouldn’t dream of doing anything else in the future.

“There are just so many good dogs out there that need good homes,” Saunders said. “We’re just so lucky we ended up with the two that were meant for us. We’ve been told that if we hadn’t taken Kody, she probably would have been put down, and we can tell Bonnee had been abused. The both of them were just meant for us and for each other.”

Her passion having been sparked by her two “furry, four legged children,” Saunders began fundraising for the Suffolk Humane Society’s Mutt Strut last year and topped the list by raising $1,020 for the society’s efforts.

“My dogs are just such a big part of my life that this is where my heart is,” Saunders said. “It’s with my girls. My heart is to give to homeless and mistreated animals, and helping the society by raising money is what I can do to help. I wish more people would think about adopting. Having done it myself, it’s what we’ll do in the future.”

Saunders will be at the Mutt Strut on Sunday with Kody and Bonnee.