‘I have not yet begun to fight!’ 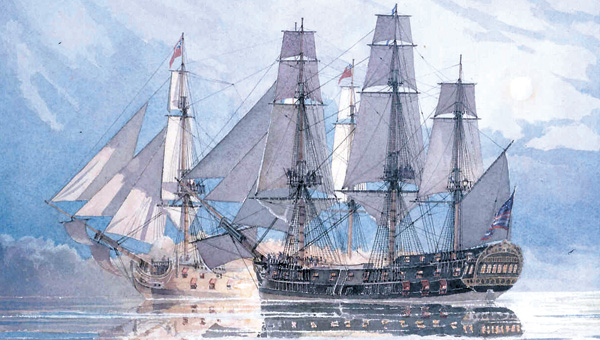 Not all of the military action of America’s Revolutionary War took place in the New World. One pivotal battle, in fact, took place 231 years ago this week, within sight of the cliffs of Great Britain’s Flamborough Head.

The conflict between the Continental Navy’s frigate, Bonhomme Richard — with her complement of 42 guns and 322 crew — and the Royal Navy’s Fourth Rate Serapis, carrying 50 guns and 325 sailors, may not have been one of the more important strategic battles in the war, but it solidified the reputation of the 33-year-old American commander who won it against all odds, and it helped guarantee that the name “Bonhomme Richard” would be around for a long time among American seamen. 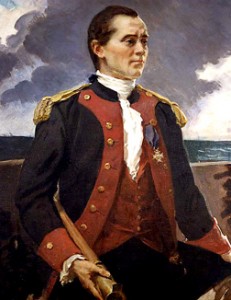 Today’s USS Bonhomme Richard (LHD-6) is a far cry from the original ship that Commodore John Paul Jones named in honor of Benjamin Franklin, whose “Poor Richard’s Almanack” had recently become a hit in France.

The Bonhomme Richard of 2010 is an 844-foot Wasp-class amphibious assault ship, weighing in at 40,500 tons and capable of delivering 42 CH-46 Sea Knight helicopters, five AV-8B Harrier attack planes and six ASW helicopters to a combat zone, along with nearly 2,000 Marines and 1,000 sailors.

It was a bit different in 1779, though. Jones and his crew, along with four support ships, had been charged with intercepting shipments of goods along the British coast. On Sept. 23, they spotted the HMS Serapis — which, along with the 20-gun HMS Countess of Scarborough, was escorting a convoy of about 40 vessels returning from the Baltic with supplies for the Royal Navy.

For most of the battle that ensued, Jones’ Bonhomme Richard and the Serapis, commanded by Capt. Richard Pearson, fought alone against one another. Jones’ ship was outgunned at the start and nearly crippled by a blast to its main gun battery early in the fight. And when one of his ships came briefly to help amidst the dark and smoke, it wound up doing more damage to the Bonhomme Richard than to her opponent.

Jones relied on decisive naval strategies and the strength of his crew to outfight the more-powerful Serapis. At one point, in order to negate the speed advantage that his opponent enjoyed, he drew the Bonhomme Richard close by and had his crew lash the two ships together.

The crews exchanged fire at close range for more than three hours. Jones struggled to keep his ship afloat and his men from abandoning the fight.

“Have you struck your colors?” Capt. Pearson called through the haze of battle.

“Struck sir?” Jones responded. “I have not yet begun to fight.”

With that, the Americans redoubled their efforts, dealing a savage series of blows to the Serapis from all sides, including the rigging. Pearson finally ordered his crew to strike colors at 10:30 p.m., not realizing that the American he was surrendering to was the captain of a sinking ship.

Despite the efforts of her crew during the next 36 hours, Bonhomme Richard could not be saved. She sank beneath the waves — still flying the U.S. flag — at 11 a.m. Sept. 25, an hour after Jones had transferred his crew to the captured and badly damaged Serapis.

The battle helped seal an early alliance between the Americans and the French — from whom the Bonhomme Richard had been a gift — and it raised the perception of risk, and hence the cost, to those who were shipping British goods.

The victory also helped set the reputation of Commodore John Paul Jones and gave the current Bonhomme Richard its motto — “I have not yet begun to fight.”