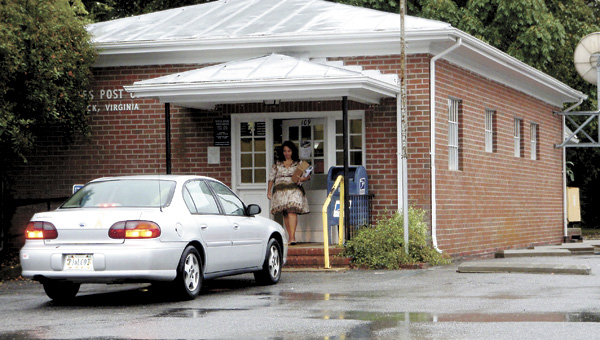 Rumors are swirling that the Chuckatuck post office, shown here, will close or reduce its hours. Postal officials deny the stories.

Postal service officials are denying rumors they are planning to reduce the hours of operation at the Chuckatuck post office.

“There has been no official discussion on Chuckatuck,” said Cathy Boule, a spokeswoman for the U.S. Postal Service. “We’re reviewing the retail traffic, but we’re doing that nationwide.”

Rumors have swirled for months that the office on Kings Highway either would be closed or its hours would be reduced. Chuckatuck resident Dot Dalton created a flier warning her neighbors of the concern and distributed it to local businesses and at the recent Chuckatuck Volunteer Fire Department fish fry.

“The writing is on the wall,” she said. “This is on the chopping block.”

The flier asks residents to call Congressman Randy Forbes, state Senator Fred Quayle and Delegate Chris Jones to speak out against any changes at the office.

“We’re hoping enough pressure is going to come on them right now,” she said.

Customers who couldn’t do business at the Chuckatuck post office would have get to the Crittenden post office, six miles away, or make the nine-mile journey to the North Main Street office downtown, or drive more than 10 miles to the Driver post office.

Other post offices in Suffolk, including the Whaleyville station, already are open only three and a half hours on weekdays.

Boule said a notice would be posted at the post office to notify customers 30 days in advance if changes are planned.

Fall in love with Virginia

The “Fall in Love with Virginia” market will make its fourth annual return on Saturday 10 a.m. to 4 p.m.... read more