Too wet, too late 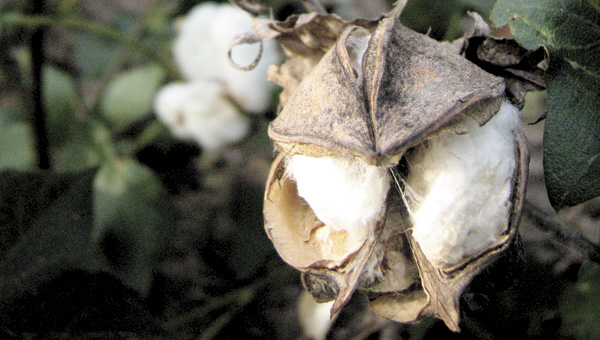 Cotton is one of the many crops suffering from severe weather conditions this season. Farmers are anticipating 50 to 90 percent yield losses on various crops.

The long-awaited rain Suffolk farmers have been yearning for has come at last.

However, according to Surry Virginia Cooperative Extension agent Glenn Slade, it’s a few weeks too late to help spare the area’s crops.

“It’s just late for the crops,” Slade said. “It’ll help soften the ground for peanut digging, since the ground has become so hard and dry from the summer, but other than that it’s too late to do much good.”

Late-planted soybeans are the one crop that may benefit, he added.

“Peanuts and soybeans are already starting to be harvested, but the later crop of soybeans that were planted may get a little something out of it,” Slade said.

The rain won’t have any effect on the early soybeans, peanuts or cotton, though.

“Some peanuts are already done, and cotton harvest was just beginning, too,” Slade said.

Slade said that the area is anticipating a 50-percent yield loss of cotton.

This news comes after Suffolk farmers experienced a 90-percent yield loss in corn crops and 80-percent loss in pasture, causing area agencies to submit a drought disaster declaration in August. It was passed on from Gov. Bob McDonnell and is being considered by the federal Secretary of Agriculture.

Slade said estimated yield losses cannot yet be made for peanuts and soybeans.

“All together, we’ve had about a normal rainfall, we just never had any rain when we needed it,” said Watson Lawrence, a Chesapeake Virginia Cooperative Extension agent. “If the rain had come two or three weeks ago, we’d have a bumper soybean crop, but because we had such a dry spell in September, the test weight of the soybeans will probably result in lower yields.”

While storms always bring a chance of damage to crops, both Lawrence and Slade said the crops are most likely safe.

“Corn has the highest likelihood of getting blown down by high winds, but that’s mostly harvested,” Slade said. “Farmers just have to wait for things to dry back out and finish the harvest.”

Fighting cancer, one recipe at a time

Reuther Haden tosses a tennis ball at a fundraiser held for him last year. Members of a local club now... read more