Football all over Suffolk tonight 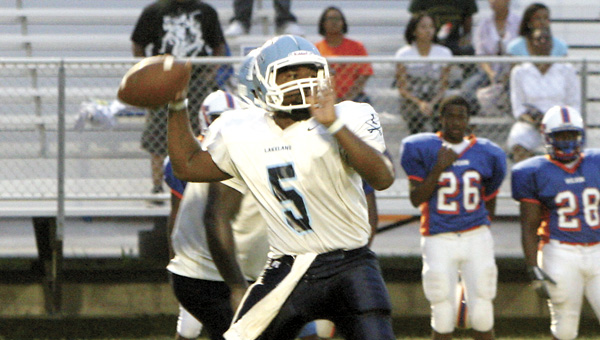 Boykins starts: Lakeland junior quarterback Walter Boykins threw for a touchdown and rushed for a touchdown on Saturday in the Cavs’ 36-19 loss to Western Branch. Lakeland hosts Indian River in a Southeastern District game tonight. Nansemond River, King’s Fork and Nansemond-Suffolk have home games as well.

The Cavaliers played their best offensive game of the season last week in what was still a 36-19 loss to Western Branch. Walter Boykins passed for 176 yards including a 69-yard play with Jaquan Demiel for a touchdown. Lakeland still committed three turnovers and 11 penalties.

The Braves, after an 0-10 record last season, have wins over Deep Creek and King’s Fork. Indian River rallied from a 14-0 deficit to lose 21-20 in overtime against Grassfield last week. IR pulled off fourth-quarter comebacks in its two wins.

The Grizzlies escaped what would’ve been a big upset in their pursuit of a playoff spot with the overtime win over Indian River. A converted extra point was the difference in the overtime session.

King’s Fork stayed close with Great Bridge through the first half, being down 14-7 at halftime, Saturday. Charles Clark rushed for a 4-yard touchdown that gave the Bulldogs the first score of the game.

Grassfield’s only loss, albeit narrowly with a close call against Western Branch as well, is to Oscar Smith.

Nansemond River’s scored only seven points in its last three games since the Warriors’ win over Lakeland. The Warriors must face undefeated Great Bridge on a very short week after playing Deep Creek Monday night.

Wildcat quarterback Brad Hudson threw for 346 yards and four touchdowns, with a rushing touchdown added in, in GB’s 35-7 win over King’s Fork Saturday. Those numbers are a normal night for the Great Bridge offense.

The Saints relied on defense and running the ball, even when it was tough going against the Patriot defense, for their two wins over Portsmouth Christian last fall. In the state semifinal win at NSA, the Saints got an interception for a touchdown and a safety.

Unfortunately for the Saints, the highlights of the last two weeks, both losses, have been two 50-yard field goals by Bobby Lamm.

The Patriots come into the game off a 36-14 loss to Greenbrier Christian on Monday.

Suffolk police are asking for help from the public in locating a suspect in the theft of a car during... read more