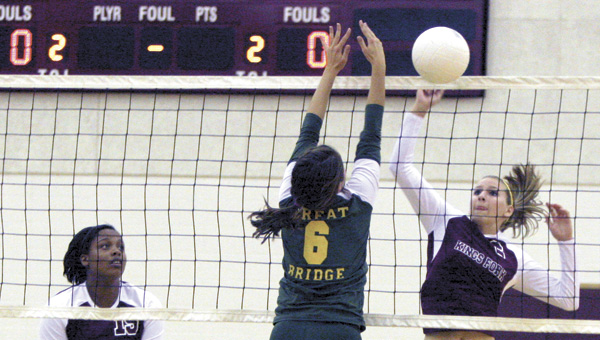 King’s Fork’s girls volleyball team continued showing how much it’s improved in one season’s time Monday night. It still wasn’t enough though, at least over the course of a whole match, to upset perennial district power Great Bridge.

For the opening set, and for a couple spurts in the sets Great Bridge went on to win, the Lady Bulldogs held their own. In previous seasons, including last year when KF went winless, Great Bridge and King’s Fork were in different classes.

Mainly by playing outstanding defense and scrambling to keep points alive, the Lady Bulldogs stayed close to Great Bridge throughout game one.

Neither side led by more than a point or two until a Lady Bulldog run late in the set. Jamika Townsend’s ace put KF up 21-20 and a long rally, with both sides hustling for multiple digs, ended with Megan Blythe’s shot falling for a KF point and a 24-21 lead.

The Lady Bulldogs kept the hustle going the rest of the way, but Great Bridge’s strong, consistent hitting proved too much to keep at bay.

Townsend, one the Lady Bulldogs’ best all-around players and KF’s usual setter, played through sets three and four on an injured foot or ankle. She still finished with seven kills, five aces and five assists.

Great Bridge jumped out to a huge lead in the second set. The Lady Wildcats led 21-10 before KF came back to make the set score look a little closer.

The Lady Bulldogs led 13-11 in the third set for what turned out to be their best opportunity to make their upset bid really interesting.

Great Bridge rolled off a 7-0 run to lead 18-13. With a good run on Blythe’s serve and a couple GB errors helping, KF cut the margin to 19-18 GB before the Lady Wildcats finished the set with six straight points.

With four matches left, the Lady Bulldogs (8-7, 7-7) are alive, but with little room for error left, to reach the Southeastern District Tournament.