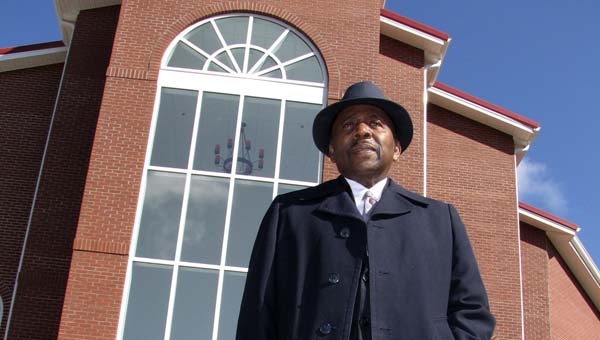 Union Baptist Missionary Church is moving down the street and changing its name.

The church, which now will be called Union Baptist Life Center, is being forced to move because of the Nansemond Parkway widening project. However, it came at an opportune time for the 147-year-old congregation, Bishop C.V. Russell Sr. said.

“The Lord had given me a vision to expand the ministry,” Russell said.

Russell has been at the head of the church for 47 years. The original building was purchased in 1865 from another congregation and became Union Baptist Missionary Church. The building burned in 1963, and was reconstructed on the corner of Nansemond Parkway and Shoulders Hill Road.

The church has grown to include ministries such as a day care with 60 children who attend regularly, several choirs and a large youth ministry. When the city came calling for part of its land to widen the road, they knew it was time to move to a new, larger building.

Russell is using the new, 1,450-seat sanctuary as an incentive to get his congregation inviting their friends and family.

“It’s very unique how people are attracted to something new and big, but you’ve got to have a program to keep them once they get in,” Russell said.

He has challenged each of his members to invite at least one non-member to church once a month. He hopes the plan will result in a doubled membership number in just three years.

“You can’t go fishing in your bathtub,” Russell said of his outreach philosophy. “We’ve got enough room now.”

The new church, located at 5414 Nansemond Parkway, holds a large sanctuary and plenty of rooms for Sunday school and other programs — an important aspect of the church, Russell said.

“Our goal is to push education, secular and spiritual,” he said. “To be a whole person, you need teaching from both sides.”

The church will begin holding two worship services on Sunday mornings at 9 and 11 a.m.

The congregation will celebrate the new building with a ceremony Oct. 30. The first service will be held there Oct. 31.

“I’m excited,” said Harriett Hurdle, whose family has been involved in the church for more than 100 years. “Out of four pastors, [Russell] has proven to be the best. He has his members at heart.”