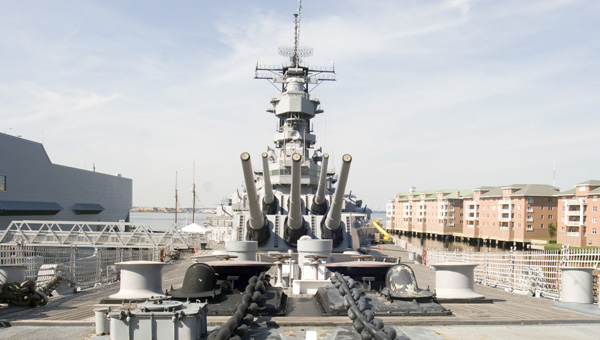 Guided tours of the ship’s Wardroom and six other spaces inside the ship are part of a new “Topside Tour” offered by Nauticus now that the city-owned museum has taken possession of the retired Wisconsin.

With her 16-inch guns pointed down Plume Street, the battleship Wisconsin, BB-64 in the U.S. Navy’s numbering scheme, has been an imposing presence on the Norfolk skyline ever since she was berthed there on Dec. 7, 2000, 57 years to the day after she was launched from the Philadelphia Naval Yard.

Until today, visitors to the Iowa-class battleship could walk the great ship’s deck, try to peer inside a few dirty portholes and only imagine — or if they’d served aboard the ship during one of her cruises, remember — what it was like inside and below decks.

Today, however, marks a new chapter in the venerable battleship’s history. Starting today, visitors will get a chance to go inside.

Guided tours of the ship’s Wardroom and six other spaces inside the ship are part of a new “Topside Tour” offered by Nauticus now that the city-owned museum has taken possession of the retired Wisconsin.

The updated experience, according to Rolf Johnson, deputy director of education and exhibits for Nauticus, “will be much more interesting, much more engaging.”

The areas that will be included in the tour include the wardroom, or officer’s mess; the captain’s in-port cabin and stateroom; the captain’s galley; the flag cabin, set aside for admirals serving as ship commanders in battle groups, flotillas or fleets; the flag bridge, where an embarked admiral could watch the action without interfering; and the navigation bridge, which was the main control space for the bridge and the primary battle station for the ship’s commanding officer.

Visitors who pay the $20 fee for the tour in addition to the $11.95 cost for a ticket to Nauticus will get a one-hour trip through Officer’s Country and into the heart of some of the ship’s command and control areas, all on a tour that will span parts of four decks and include spaces most civilians would never see.

A special presentation takes place inside the ship’s radio room, where in 1991 sailors oversaw the launch of eight of the 47 Tomahawk cruise missiles that initiated Operation Desert Storm, the first Persian Gulf War. The equipment in that room includes the computer screens, keyboards and seats that were being used at the time of that attack.

“Opening up areas of the battleship for public visitation has been a long time coming, and great credit goes to our staff,” Nauticus Executive Director Hank Lynch said in a press release. “We’re excited to be able to finally allow access to select areas of the ship for our visitors coming from every state and abroad.”

According to Johnson, today’s opening is the first phase of a three-year program of opening spaces aboard the ship.

John Elliker, the project manager for the USS Wisconsin and the man who wrote the application that convinced the U.S. Navy to bring the ship to Norfolk harbor in 2000, said the Wisconsin’s engineering spaces would be the next to be opened, following environmental remediation and review at the direction of the Environmental Protection Agency.

“That’s the number one space that people want to see,” he said. “This was the easiest to get ready.”

The city has been working for two months to get the tour spaces ready, along with new exhibits and a film that describes the Wisconsin’s importance to the U.S. Navy.

The ship had been listing in its berth for the past 10 years, Lynch said. After re-ballasting, he added, “She’s now sitting on an even keel.”

Still, though, the ship is in better shape than most of its counterparts around the country, Elliker said, giving as an example the USS Iowa, which is anchored in the harbor in San Francisco awaiting a permanent home and in desperate need of a new teak deck.

“[The Wisconsin] has not been allowed to deteriorate as much as other battleships out there,” he said. “This ship is in great shape. We’re doing all the right things here in Norfolk.”

Honoring the fallen: A folded flag and framed letter honor one of the thousands of people whose names are inscribed... read more