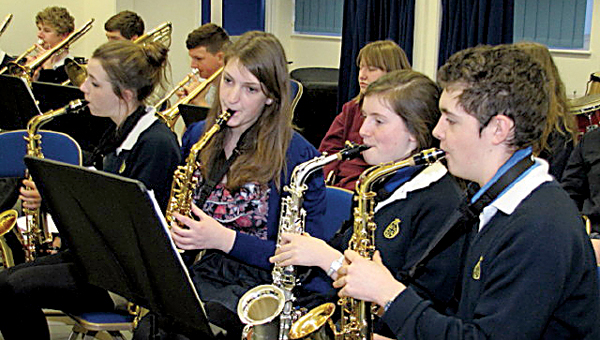 English visit: Musicians from the Bury St. Edmonds Upper County School in the County of Suffolk, England, play in their hometown. They are visiting Suffolk, Va., as part of a musical cultural exchange between the cities set up by Suffolk Sister Cities International.

The British are coming to Suffolk, and residents have a chance to share in part of their visit.

A group of students from Bury St. Edmonds Upper County School from the County of Suffolk, England, will visit Suffolk, Va., Feb. 16-24. The exchange is part of Suffolk’s Sister Cities International program.

The musicians — a swing band, a Dixie band, saxophone and string quartets, crescendos and barbershop vocal ensembles — will perform two public concerts on Feb. 18 and Feb. 22. Tickets to the concerts are free.

“This is Sister Cities’ way of sharing this concert with as many people in our city as possible,” said Mary Jane Naismith with Suffolk Sister Cities. “It’s something for everybody.”

The visit is the latest in a series of cultural exchanges between Suffolk, Va., and its British sister city. Suffolk, Va., also is paired in the program with Oderzo, Italy, where Amedeo Obici of Planters Peanuts fame was raised.

Students from the school also visited in 2007. In 2009, a group of students from all four high schools here went to England for a visit and performed in several venues there.

“With the world shrinking as quickly as it is, it’s important we understand other people and share with one another,” Naismith said.

In addition to giving concerts at all three public high schools and Nansemond-Suffolk Academy, the British students will tour Suffolk, attend a Norfolk Admirals hockey game and visit Virginia Beach, Jamestown and Williamsburg.

“They’re just so good,” Naismith said of the musicians. “In England you aren’t assigned to a school, so he [the director] can recruit really good musicians.”

“I think these friendships that we establish between the two cities help us understand the two cultures and how much we really are alike than we are different,” she said. “There are several friendships from ’07 that have continued. I can’t tell you the value of the friendships that I have formed. It’s just amazing how close you become.”

To reserve tickets for the concerts, call 242-3476 or email spepa.ford@gmail.com.