For the three months of the high school softball season, Amanda Lafferty and Megan Blythe are opponents, Lafferty at Nansemond River and Blythe at King’s Fork. 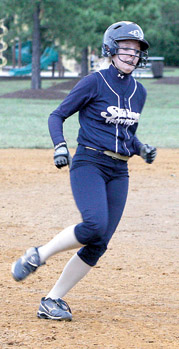 Third base: Eryn Haley pulls into third base during a Sting Fastpitch practice on Sunday on the team’s practice field near Driver. Haley also plays for Nansemond River. The Sting’s fall schedule includes trips to Pennsylvania, North Carolina and South Carolina.

Year around, even on a Saturday morning hours after a Warrior vs. Bulldog game, Lafferty and Blythe are loyal teammates playing for Sting Fastpitch.

“It’s year-round. When it’s school season, you have school practice for about three hours, then go straight to travel ball practice,” Blythe said. “There’s something to do with softball at least six days a week.”

“That’s pretty much exactly what I do,” Lafferty said.

The Sting was practicing late Sunday afternoon under overcast skies on a field near the Suffolk Meadows neighborhood in Driver.

Relatively speaking, it was an off weekend for the Sting, even while what most folks think of as softball season is six months away.

On Sept. 17-18, played in the Newton Rock Invitational in Newton, Pa. The Sting was getting prepared for the Scrappers Showcase in Salem this weekend.

Much of the Sting has been together as travel teammates for years, with each year adding up to 70-100 games, said Sting head coach Scott Haley.

Lafferty and Lady Warrior teammate Eryn Haley are in their sixth year on the Sting, now on the 18-and-under squad.

The trip to Pennsylvania was the first tournament for this Sting 18U roster together, though. Some new recruits joined the Sting this fall from previous club teams.

“A lot of times it’s tough to bond, with girls coming from different teams,” Coach Haley said. “But they were already like sisters.”

“They were joking and having a good time, which is very important on the field and with how much time a team spends together,” Haley said.

The wins and losses were mixed on the Pennsylvania trip. More important was how the team played and, moving forward with the rest of the showcases and tournaments for the Sting this fall, how each player improves individually.

“For your teammates and yourself, at this point (with an 18-and-under team), it’s not about trophies anymore. It’s about getting letters of intent,” he said.

Randi Jo Coffey, who plays for Nansemond River, and Kenzie Conner, who plays at Southampton Academy, along with Lafferty and Blythe, are the four seniors on the Sting.

“It’s really hard to keep up (with school work) with tournaments most weekends,” Lafferty said.

“There are a lot of late nights with homework,” Blythe said.

“And on the way back from tournaments,” Blythe said.

The Sting is hardly the only club team with all sorts of club versus school conflicts.

Most of the time, facing a travel teammate in a high school game is fun. Sometimes, say the second after a pitcher nails a hitter/Sting teammate with a fastball, it’s awkward.

For players striving for collegiate softball opportunities, the travel team takes priority. Playing three or four games a day, and maybe even more importantly, a road trip’s vans, meals and hotel rooms, all make the bond of club over school understandable, as well.

College seasons go on as high school seasons do. College scouts are common at the ASA (Amateur Softball Assocation) tournaments in the “offseason”, less common at travel events during the spring and rarer than that at high school games.

The Sting’s October weekends have trips to Salem, Florence, S.C. and Greensboro, N.C.

The travel schedule slows a little in the spring for school ball, but just a little.

“You pack everything the night before (Thursday) because you won’t have time once you go to school (on Friday),” Blythe said.

A Southeastern District softball contest concludes around 8 p.m. Friday. With a huge debt of gratitude to parents, leaving straight from Friday’s game means getting to the town a tournament is in very early on Saturday.

If the first game’s at 8 a.m., it means being at the field around 7 a.m., which means waking up, getting breakfast and getting on the way to the field sometime around 5 a.m.

Returning from a tournament, setting out late Sunday to be back at school, is no easier.

“This group is a phenomenal group of kids,” Haley said.

To keep up with such a schedule and do so with energy to spare, on and off the field, that’s no exaggeration from their coach.

So, I guess this Peanut Fest thing really is a big deal. That might sound like an understatement, but being... read more