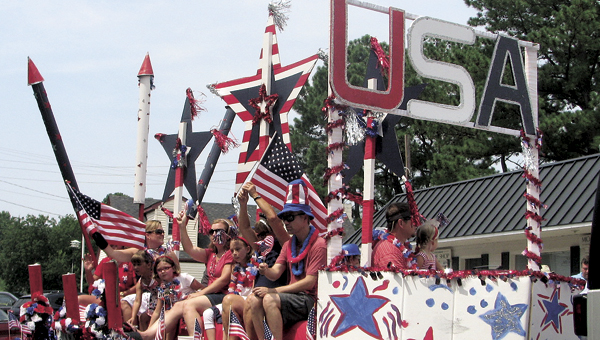 The July 4 parade in Eclipse is a longstanding tradition that is enjoyed by old-timers and newcomers alike. Many of North Suffolk's "villages" are making efforts to hold on to their history while welcoming new residents.

Although North Suffolk has exploded with new residents in the last decade, the villages there were well-established before Suffolk became one of the fastest-growing cities in Virginia.

Areas including Chuckatuck, Driver and the Crittenden, Eclipse and Hobson area, have long histories and deep-rooted traditions that often go unnoticed by new residents.

With the influx of people in the northern part of the city, many residents have the challenge of holding on to that history while continuing to encourage growth.

Drexel Bradshaw, a board member of the Greater Chuckatuck Historical Foundation, said he thinks it’s important for the villages to hold onto their history no matter what.

“History has a way of getting away from us,” he said. “Too many times, I think, we forget our history.”

With the goal of ensuring the stories of Chuckatuck didn’t go unnoticed by new generations and residents, the Historical Foundation put together a book about the village, which published in December.

Bradshaw said the history of Chuckatuck is mostly in the memories of older people, and if you don’t capture those stories, they will get lost.

However, by doing the book, the group hopes more residents and future generations can know the origins of the village and what made it what it is.

Bradshaw said new residents to Chuckatuck are different than the ones who move to other parts of North Suffolk and are more open to hearing the stories.

“I think a lot of people who move into Chuckatuck like it because it is quiet and there are people who are here from all walks of life,” he said. “They come to this area to go to the country.”

In contrast, Karla Smith, a member of the Crittenden, Eclipse and Hobson Heritage Foundation, said she thinks people who move into North Suffolk’s other areas might wonder about the history, but they usually don’t pursue answers.

However, she said, she also thinks older residents are eager to share these stories, and new residents would find it very interesting to find out more about their new homes.

“There are so many people who want to share their stories,” she said.

The C.E.&H. Foundation helped the Chuckatuck group with its book; it also completed a book for its own area; and now, one is planned for the Bennett’s Creek, Driver and Pughsville areas.

“It will be a nice way for the people who are moving into Burbage Grant Harbour View – it will give them a look into what was going on in the land in the past,” Smith said.

What makes Bennett’s Creek a little different is that there was never an established village like Driver or Chuckatuck.

Smith said she thinks the identity of this area has changed more than the other villages because of that.

Additionally, Bennett’s Creek has so many new residents to inform, but Smith said she thinks they would be eager to find out about the past in that area.

In contrast, Bradshaw said, he thinks a good number of new Chuckatuck residents are pretty open to learning about the village.

“I believe there are some people who are interested in history,” Bradshaw said.

However, for those that aren’t interested, the Historical Foundation hopes to capture their attention in a different way.

Bradshaw said the group is planning to restore older stores at the intersection of Godwin Boulevard and Kings Highway to show young people who live there what it was like 60 or 70 years ago.

Additionally, the group is reaching out the Internet-savvy generations by adding more to its website, including interviews with older residents and photos of what Chuckatuck used to look like.

Both Smith and Bradshaw said they think new residents and young generations need to learn about their villages in order for the history to survive.

Bradshaw said getting people to embrace and advocate for history is essential.

“That’s the only way history will be preserved.”