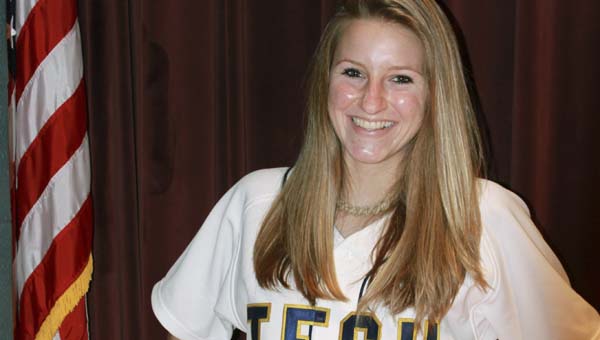 Megan Blythe, a senior on the King’s Fork High School softball team, has signed a letter of intent to play softball for West Virginia University Institute of Technology.

Amid her excitement, she also felt surprise, because the athletic scholarship was not something she had always anticipated.

“It is awesome,” she said. “I wasn’t expecting it ‘cause when I first started playing it was like my dream to do it, and then for a while there I didn’t want to do it at all. And then my coaches Scott Haley and Todd Thursby and Jeff Hamilton got me back into it, ‘cause they wanted me to really focus on that and they got me there. So, I wouldn’t be here without them.”

Haley, Thursby, and Hamilton are coaches for her travel team, the Suffolk Sting. They were instrumental in making different colleges aware of Blythe and her abilities, including WVU Tech coach Karin Gadberry.

“They did a skills video, and we sent it out to all the coaches, and once (Coach Gadberry) saw it, she told me to come down and get a visit,” Blythe said. “And I got to practice with their team and at the end of the day, she gave me my offer.”

Lady Bulldogs coach Richard Froemel was not surprised by the offer.

“Megan is a solid softball player,” he said. “She’s getting recruited at third base, and she plays centerfield for me. She’s very quick … good read on the ball.”

Blythe was actually considering offers from multiple colleges. Aside from a change in scenery, WVU Tech represented the most appealing opportunity to her for a variety of reasons.

“I definitely wanted to get somewhere new and somewhere out of Suffolk,” she said. “And then, plus, they showed the most interest and were like, ‘We want you here right now.’ And they offered the position that I play. So, that was my big interest. They wanted me to play third for them.”

“She’s going to be able to contribute very quickly for our program,” Gadberry said. “Her personality fits well with my philosophies and where I’m trying to go.”

Gadberry took over the softball program at WVU Tech last year. Already this year, the Golden Bears are sitting at 18-7.