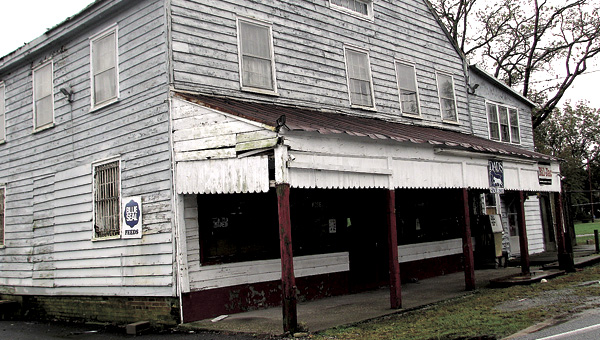 The Gwaltney Store in Chuckatuck has been named one of the state’s most endangered historic sites by Preservation Virginia. It is the second Suffolk site to be named to the list since 2009.

A Chuckatuck building has the distinction of being listed as one of the state’s most endangered historic sites by a nonprofit organization that specializes in historic preservation.

The Gwaltney Store, an early 19th-century general store building, is threatened because the city has issued code violations and condemned the building, according to Preservation Virginia.

“It’s a unique landmark, and we need to try to find a way to preserve it,” said Carolyn Keen, who nominated the building for inclusion on the list. “There’s got to be something somebody can do.”

Indeed, efforts are in the works to save it. A meeting of the Greater Chuckatuck Historical Foundation was to have been held Tuesday night, where the fate of the Gwaltney Store was on the agenda.

The store sits at 5996 Godwin Blvd., at its intersection with Kings Highway.

Drex Bradshaw, a board member of the Greater Chuckatuck Historical Foundation who worked in the store part-time as a boy, believes something could have been on that corner earlier than the early 1800s.

“Because [Route] 10 runs right through Chuckatuck, there was probably a trading post or stagecoach or something there,” he said in January for a story on the group’s efforts to help save the store.

The earliest known name of the store was Peck’s Cheap Goods. The historical foundation has a tintype photo of the store with a sign bearing that name.

Since then, it has been through a succession of owners. The current owner, Kent Gwaltney, inherited it from family. His grandfather took over the general store in the 1920s, then his father took on the responsibility.

When his father died a few years ago, Gwaltney closed the store.

It has been cited for various code violations, including failure to make repairs and peeling paint. In August, it was condemned, and a sign posted on the building stated it would be demolished in 90 days if Gwaltney did not fix the code violations.

In January, he said at a meeting of the Economic Development Authority that he almost let it happen. However, the historical society asked him not to let it go.

He received a $10,000 grant from the EDA’s Façade Grant program to make repairs. He told the authority the historical society wanted to use it as a museum for items it had acquired while researching its book, “Chuckatuck: A Crossroads in Time.”

Gwaltney also envisioned some sort of retail use to accompany the museum, he told the EDA.

Gwaltney and representatives of the Greater Chuckatuck Historical Foundation declined comment on Tuesday because of the pending meeting.

Preservation Virginia recommended a feasibility study to give the foundation more time to develop a preservation plan for the store.

This isn’t the first time Preservation Virginia has placed a Suffolk structure on its annual list. In 2009, the Obici House made the cut because many feared it was in imminent danger of being demolished to make way for a newer building at Sleepy Hole Golf Course, where it sits on the 18th hole.

The 1870s Italianate home of Suffolk benefactor and Planters Peanuts founder Amedeo Obici and his wife Louise had been used as a special-events venue over the years but had fallen into disrepair. However, after the home’s inclusion on the list, golf course lessee Ronnie Rountree eventually extended his lease to include the home, restored it and made it into a special-events venue once again. It re-opened last fall.