Ready for the stage 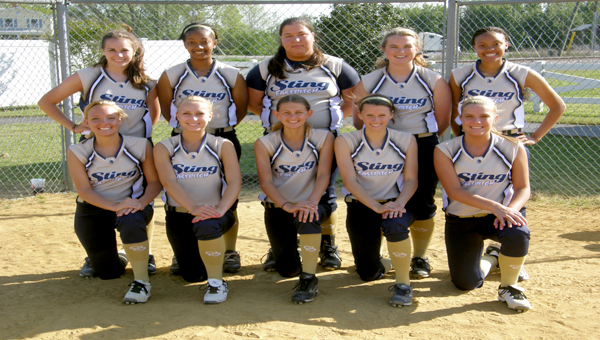 Rising seniors on the Suffolk Sting fastpitch team look to their summer tournaments as the chance to make an impression on college recruiters. Among those the recruiters will be watching are: front row, from left, Eryn Haley, Michelle Stamey, Jessica Hamilton, Brittany Dick and Kalen Stankoski; and back row, from left, Courtney Wilson, Lauren Irvin, Amber Alexander, Amanda Lafferty,Deja Henderson.

Summer’s the time to shine for travel softball players

The mission of the program is at its most crucial phase as the juniors become rising seniors and then enter their final year of high school in the fall.

“We’re Sting,” head coach Scott Haley said, “and our job is to take local talent, (talent that) wants to play at a college level, and do everything we can to help them get there.”

These eight girls have been able to see how the recruiting process works with the senior classes that have gone before them. The difference was that these juniors were not the ones under the magnifying glass then and most of the college coaches were not allowed to talk to them due to recruitment regulations.

However, far from being shy, these girls have been waiting and preparing and are hungry for the attention they have seen help so many other girls earn college scholarships.

“Now it’s their turn,” Haley said. “Whatever the weekend of the (Newtown Rock Showcase) is, which is the very first showcase, they knew that they wanted to be sharp as a tack so that they can come out of the box very well. ‘Cause starting in July, the college coaches can walk right up to them and say, ‘What’s your name?’”

The Newtown Rock Showcase takes place June 23-24 in Newtown, Pa., and 10 other events will follow it.

Haley emphasized the importance of the juniors performing well athletically and academically in light of the rising costs of college.

“You could very easily come up against a $30,000 college bill and go, ‘Hey, I’m sorry,’” he said. “But when (these girls) go and they impress a college, and they get a fair score on (their) SAT or ACT, and all of a sudden you’re getting a quarter amount of your money paid by academics, (a) quarter or half paid by athletics, it’s a big deal.”

Something else that really motivates these players to perform their best is the crucial role that they play in each other’s lives at this point.

“So, you get in a situation,” Haley said, “where all of them have bought into the story, ‘It’s my job, individually, to help my teammate look good in front of this college.’”

The specter of the coming months has helped the juniors define what their goals are.

“I guess it’s really making me decide if I really want to play in college or not, and I really do,” Brittany Dick said. “And so, it’s making me step up and actually become more involved and actually take everything so seriously and … take warm-ups seriously, take everything more to an extreme level, because this summer is the best time to get noticed.”

Eryn Haley has formed a clear objective, as well.

“Definitely to try to get signed by the end of this summer,” she said. “That’s one of my biggest goals, because I really want to be able to relax my senior year and just keep up my grades and just be able to let everything go and have my SAT and ACT and not be rushing all at the last minute to get all that done.”

The academic responsibility that accompanies athletic eligibility is something that has been on Lauren Irvin’s mind this year.

“I just want to get into college, have a good grade point average so I can play ball there,” she said. “They’re not going to want me if I don’t have that.”

The tournaments will take them to Virginia Beach, Roanoke, Pennsylvania, North and South Carolina, and Florida.

By Titus Mohler Correspondent Each of Suffolk’s public schools had at least one representative on the 2012 All-Southeastern District second... read more