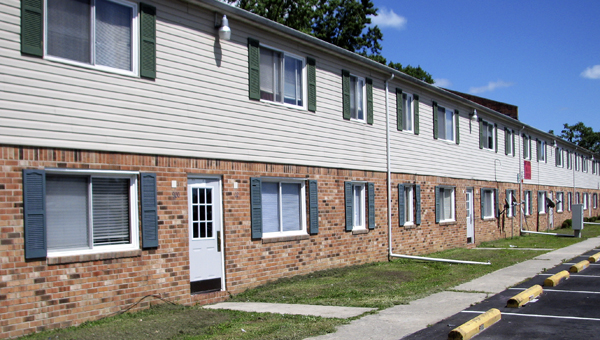 The 16-unit apartment complex where a 3-year-old was shot Friday morning is on White Marsh Road.

Suffolk police have charged a 22-year-old man in the shooting of his 3-year-old son on Friday morning.

Michael Goodman, of 406 S. Sixth St., allegedly accidentally shot his son in the shoulder just before 9 a.m. during a dispute with the child’s mother at an apartment complex in the 900 block of White Marsh Road, according to a city press release. He and someone else then drove the child to Sentara Obici Hospital.

The 16-unit apartment complex features four outer doors that lead to narrow hallways with a staircase. There are two apartments at the foot of each staircase and two at the top.

Neighbor Allison Copeland, who said her children play with the injured boy, heard the shots.

“I heard her screaming,” she said, referring to the child’s mother. “She said he had shot the baby.”

After arriving at Obici, the boy was transferred to Sentara Norfolk General Hospital, then transferred again to the Children’s Hospital of the King’s Daughters Pediatric Intensive Care Unit in Norfolk.

His condition fluctuated throughout the day. He was initially listed as stable, then downgraded to critical, then upgraded to stable again. He is being held for observation, Kelley said.

A firearm was recovered from the vehicle the suspect used to drive to the scene, Kelley said.

Clint and Teri Rose are dissatisfied with the school district’s response to the alleged bullying of their son Chase at... read more