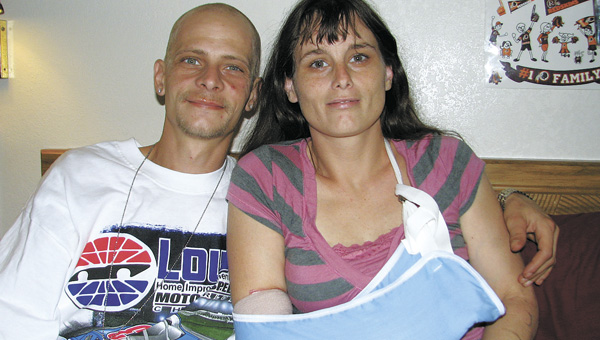 Elton and Paula Nielsen pause for a photo at home on Monday. Paula Nielsen was attacked by a St. Bernard on Charles Street on Aug. 13 and spent nearly two weeks in the hospital recovering from her injuries. The dog has since been euthanized.

A St. Bernard mix has been euthanized after attacking a woman who was walking down the street in front of its home.

Paula Nielsen, the victim, vividly remembers the dog’s heart-shaped head grabbing her arm and yanking it back and forth as it pulled her toward the backyard where it lived. But most of the next two weeks, which she spent in Sentara Norfolk General Hospital, are a blur.

“The dog came out of nowhere,” she said. “I’ve never even laid eyes on this dog until that day.”

Nielsen was walking down Charles Street on Aug. 13 when the incident happened. The dog initially knocked her to the ground and bit her hip, then started attacking her arm and dragging her through the yard.

It was going for her neck when somebody pulled her away and stopped the attack.

“It just happened so fast and so quick,” she said.

Emergency medical workers responding to the scene initially called for the Nightingale air ambulance, but it already had another patient. She was loaded into the back of the ambulance, which sped toward Norfolk.

At the hospital, Nielsen underwent seven surgeries to repair the damage. Her skin was flayed off her arm and hung past her hand. She has four holes in her hip and 11 holes in her arm, most of which are so big she can put a finger into them. Tendons and muscles are visible, she said.

Good news came on Monday in the form of a letter from the Suffolk Health Department — the dog did not show any signs of rabies after a 10-day quarantine period.

The dog had been current on its rabies vaccinations and city licenses, city spokeswoman Diana Klink said.

Klink added the dog was seized from the owner. After being advised the Commonwealth’s Attorney’s office would prosecute the case as a vicious dog because of the severity of the attack and injuries, the owner surrendered the dog, Klink said. It was euthanized on Aug. 25.

A court date is set for the owner on Sept. 27 on a charge of allowing a dog to run at large, Klink added.

Nielsen said she has suffered more than physically because of the incident. She and her husband, Elton, have burned through their savings. She is not able to work and may not be able to return to GED classes this fall. Her husband has not been able to work some days because he has to stay home to care for her.

Worse, she said, she is depressed and scared to walk out of her door, even though she doesn’t live near Charles Street.

“I’m petrified,” she said. “I’ve never in my life been scared of a dog. It’s going to take a long time for me to get over this.”

But Nielsen does see a silver lining.

“I’m just glad it happened to me and not a little kid,” she said. “A little kid wouldn’t have made it.”

The dog also was involved in an incident on April 29 this year, Klink said. The dog was chained in the backyard, and a male victim admitted to teasing the dog. The dog bit the man on his lower right thigh, but the owner was not charged because the code excludes cases where the animal is provoked.