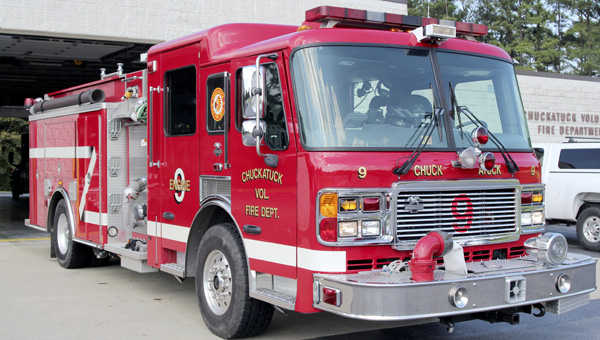 Chuckatuck Volunteer Fire Department’s Engine 9, pictured Wednesday at the department headquarters on Kings Highway, ended up in a ditch due to flooding Tuesday night while responding to a heart attack in Isle of Wight County.

Engine 9 became stuck in a ditch while crossing a flooded section of Lankford Lane,

“We were responding to a medical emergency in Isle of Wight County,” he said. “During that period of torrential rain, roads — particularly secondary roads — (that) we were on had flooding conditions.”

The water was 1 ½ to two feet deep in some places, Parsons estimated. “We came to a spot on Lankford Lane that had some substantial water running across the road.”

Parsons was able to get through in a four-wheel drive, but the engine following behind him was less fortunate.

There was “no way to determine where the road was,” Parsons said. “I do believe they were either too far off to the right, or the road gave way. The right-hand side (of the truck) ended up in the ditch.”

According to Isle of Wight County Sheriff’s Office spokeswoman Kristin Wilda, two deputies whose car was swept off the road were responding to the same call, received about 9 p.m., involving a man suffering a heart attack.

The deputies encountered “three feet of rushing water” on Tan Road after the Carrollton Volunteer Fire Department, on account of the Chuckatuck engine’s misadventure, advised them to take a different route, Wilda stated in the press release.

“They managed to escape their vehicle and were rescued by a Carrollton VFD volunteer whose personal truck was able to traverse the rising water,” Wilda stated.

Parsons said he drove a Chuckatuck four-wheel SUV to ferry the heart attack victim to an Isle of Wight Volunteer Rescue Squad ambulance on the other side of the high water.

As for the fire engine, Parsons said a man who lives in the area pulled it from the ditch with a skidder. It sustained minimal damage.

“Under extraordinary circumstances, we did the absolute best that could be done,” he added. “We never know what we’re going to be faced with, but whatever happens, we’re typically able to overcome it.”

There were no injuries among the emergency responders involved.

Through the night, the city of Suffolk reported rainfall ranging from 3.07 inches just south of East Washington Street to 5.72 inches in the King’s Fork area.

The deluge affected various roads, causing issues at upward of two dozen locations, according to the city.

For instance, flooding occurred at the corner of Shoulders Hill Road and Nansemond Parkway, the 200 block of Murphys Mill Road, the 2100 block of Indian River Road, Pruden Boulevard at Meade Parkway and Northfield Drive, Sleepy Hole Road at Nansemond River Drive, and North Main Street at the Kimberly Bridge, which had to be closed.

Despite the closure of Kimberly Bridge, nearby businesses, after experiencing severe flooding in the past, were spared this time.

“Just after midnight they had the whole road closed,” said Tiffany Gore, an assistant manager at the Express Care, who said the garage last flooded a year and a half ago. “We came here and cleaned up, then it flooded again, so we did all that cleaning for nothing.”

City spokeswoman Debbie George said emergency services received a large volume of calls during a short period of time at the peak of the downpour, but no incidents were considered serious, and no real damage was reported.

However, the flooding at Shoulders Hill Road and Nansemond Parkway meant that, for the second time in seven weeks, employees at Northgate Commerce Parkway businesses were stranded from their workplaces Wednesday.

The vice president of one Northgate business, Wanchese Fish Company’s Joey Daniels, said the company used some of its larger trucks to ferry workers across the floodwaters, a solution it also employed during a more severe flood on July 11.

A project is under way to widen Nansemond Parkway, and the intersection has been raised since the previous flood.

City Public Works Director Eric Nielsen previously has said he is confident that two 91- by 58-inch elliptical pipes, due for completion after the Hampton Roads Sanitation District installs a new force main by about October, would fix the flooding.

Dominion Virginia Power crews restored power to 2,400 customers who had experienced outages by the peak of the storm at 9 p.m., spokeswoman Bonita Harris wrote in an email.

Power was restored to all but 250 customers by midnight, and the rest were restored by 10 a.m. Wednesday, Harris wrote.

“Lighting and flooding were the biggest factors,” she wrote. “Flooding made access difficult for the last 250 customers.”

At Cedar Point Country Club, a qualifying round of the 65th Virginia State Golf Association Senior Amateur Championship, scheduled for Wednesday, was canceled due to the downpour, according to a press release.

Cedar Point had received more than 14 inches in four days, the release stated.