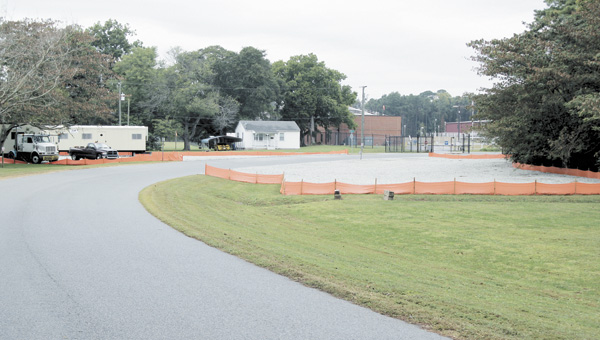 Work is set to begin on a $9 million-plus upgrade of the G. Robert House Jr. Water Treatment Plant, while a new entrance for Lone Star Lakes is also about to be developed.

The city of Suffolk is reviewing bids for construction of a new entranceway to Lone Star Lakes, while work is poised to begin on the next phase of an expansion of the G. Robert House Jr. Water Treatment Plant.

While visitors to Lone Star Lakes have entered by driving past the front of the treatment plant on Bob House Parkway, off Kings Highway, the new entrance, at the intersection of Kings Highway and Crittenden Road, will be more convenient, city Public Utilities Manager Albert Moor said.

“Bids were taken and are in the process of review,” Moor said, adding the project is valued at about $500,000.

A contract will be executed within 45 to 60 days, he said, and construction should take 120 days.

As well as improving entry into the park, another purpose of the project is to consolidate water treatment operations within the footprint of the plant, Moor said.

The new Lone Star Lakes entry project should not be confused with pre-construction activity currently occurring at the treatment plant.

Hampton Roads contractor Mid Eastern Builders, Inc. is preparing to start on a project that will do away with the discharge of wastewater into the Nansemond River, which has been occurring under a permit the city holds to do so, Moor said.

According to an invitation to bidders, the project has eight main parts, including a facility with two “gravity thickener tanks” and pumps to transfer sludge; a two-story building where sludge will be dewatered; and a waste pump station.

An existing well building will be demolished and reconstructed, with a new pump drive and other electrical infrastructure housed in an adjacent new building; another well building will be modified, along with a new materials storage building; site work for future new constructions will occur; and the plant’s instrumentation and control system will be upgraded for future new treatment processing equipment.

The project, which along with a separate project will result in the waste stream being pumped to the Hampton Roads Sanitation District, will last between 15 and 18 months and is valued at $9.352 million, Moor said.