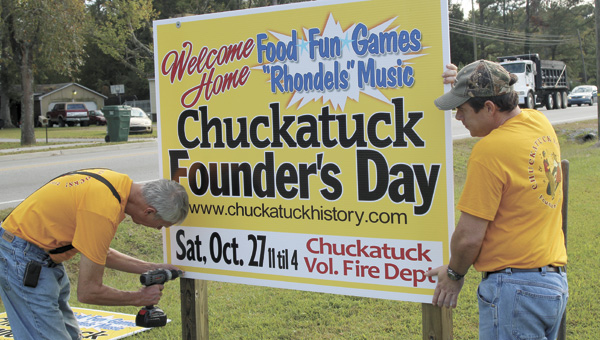 For Founder’s Day at Chuckatuck, Drexel Bradshaw and Lee Lovell erect a sign outside Saunder’s Supply Company on Route 10. The celebration is next Saturday, and organizers are hoping for a good crowd.

The village of Chuckatuck is getting ready to party next Saturday with its first Founder’s Day celebration.

Sponsored by the Greater Chuckatuck Historical Foundation, the event will take place primarily at the Chuckatuck Volunteer Fire Department, 300 Kings Highway, between 11 a.m. and 4 p.m.

The highlight of the event, themed “Chuckatuck Rocks!” will be music by the Rhondels, playing from 1 to 4 p.m.

“So many people from this area come from that era,” said an organizer of the event, Kitty Martin.

Visitors are invited to put on their dancing shoes and 1950s getup for a dance contest around 3 p.m., to be judged by The Rhondels band members.

Children will be well catered for at the event, with the Girl Scouts and Boy Scouts hosting group games and a bounce house.

There will also be three kids’ contests, including a Halloween costume contest, pumpkin carving (bring your completed creations to be judged), and decorated bike contest.

After two years of work, the foundation released “Chuckatuck: Crossroads in Time” near the end of last year, and the idea for a village celebration more or less grew from the book project, Martin said.

Copies of the book will be available for purchase at the event. The foundation will also be scanning historic photographs at the old Gwaltney Store.

Founder’s Day will also include good food from local chefs, such as barbecue, ham and hot dogs. T-shirts and bags also will be sold.

“We’re hoping to have lots of older-model cars on display,” Martin said. “It’s a free event for the community and surrounding area.”

Like other smaller communities around the nation, Chuckatuck is the kind of place many people grow up in, move away from for work or other reasons, and then spend a lot of time looking back upon nostalgically, Martin said.

“I have lived here for 34 years; it’s a nice area to live in,” she said. “We don’t know if this (event) will be the first one of many, or we’ll just have one; we’ll have to see how that goes. A lot of people who don’t live here any more are making plans to come.”

Preparations for the event have been going on for over six months, she said, adding, “I guess that still isn’t enough time.”