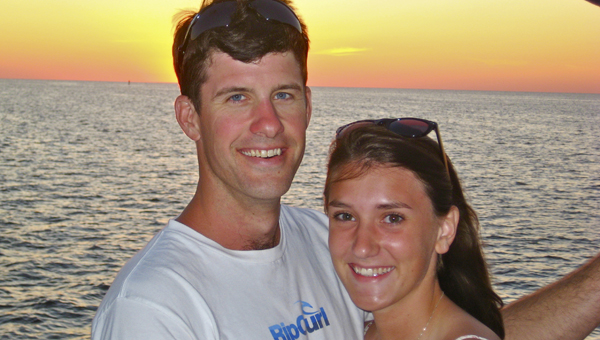 Lon Bickham poses with fiancee Raleigh Dowd prior to the accident that left him with burns over 95 percent of his body.

Survival from explosion was just the beginning

By Gwen Albers
Special to the News-Herald

The 32-year-old Hunterdale man and Chuckatuck native, whom Dowd will marry June 1, survived an April 2011, explosion on a logging site in Greensville County that left the worst degree of burns over 95 percent of his body. Only his face, which was covered by a welding mask, and his feet escaped injury.

“MCV has never had anyone survive this severity of burns,” said family friend Pam Saunders of Chuckatuck. “It’s truly a miracle. He’s come a long, long way but has a long way to go.”

Saunders credits the grace of God and the loving support of family and friends for Bickham’s survival.

“He is my miracle,” said 21-year-old Dowd, of Smithfield, who said she knew the first time she met Bickham she wanted to marry him. “I don’t think he ever wanted to give up.”

The explosion killed one of Bickham’s co-workers, father of five Gary Pierce, 32, of Emporia, and it seriously injured Jeremy Everett, 34, of Courtland and Trent Kimbrell, 38, of Chester.

Since then, Bickham has undergone more than 35 surgeries to remove burned skin. He lost several fingers and suffered numerous infections and complications with his kidneys. The 6-foot-2 Bickham at one point dropped to 106 pounds.

He was hospitalized for 13½ months, on a ventilator for a year and was on his back for more than a year.

Dowd rarely leaves his side, sleeping on a cot in his room.

Bickham cannot walk and requires 24-hour care. He has limited mobility and needs a wheelchair to get around.

“There’s no doubt in my mind he will walk again, and he will do what he wants to do,” Dowd said. “In physical therapy, they can make him walk 55 feet with two people (helping).”

A senior human development major at Virginia Tech, Dowd took off the fall semester to be there for her fiancé. She helps feed him and dress him and brushes his teeth.

“He’s my best friend,” she said. “I have my whole life planned with him, because if you know Lon Bickham, you know it’s worth it.”

The couple met 3½ years ago at Dowd’s sister’s wedding.

“The first time he met me, he told his cousin he was going to marry me,” she said.

Saunders called Dowd the “glue that has held Lon and everyone together,” although Dowd hates to take that kind of credit.

“Many ladies her age would not have stuck with their fiancé in a situation as dire as this,” Saunders said. “Lon’s, nor Raleigh’s life will ever be easy. Lon will always face pain, flexibility and mobility issues. His is a most difficult road.”

Dowd’s family has been a huge supporter as well, Saunders said.

“Her mom has lived in Richmond with Raleigh much of the time,” she said.

The son of Carolyn and Ed Bickham of Chuckatuck expects to go home around Thanksgiving. He will be staying with his parents.

“He will need round-the-clock care,” Saunders said. “He cannot feed himself; he cannot attend to his physical needs.”

A homecoming fundraiser for Hunterdale burn victim Lon Bickham will be held from 1 to 7 p.m. Nov. 11, at Chuckatuck Volunteer Fire Department, 300 Kings Highway.

A $15 ticket covers the barbecue, chicken and catfish meal, which is takeout or eat-in. Providing entertainment will be Win Winslow, Wesley Chapel UMC Ladies Trio, Steven McDonald, the Show Me Band, Hugh Byrd, the Summer Jones Band, and David and Hannah Stoup.

There will be a silent auction and a 50/50 raffle.

Tickets can be purchased from the Franklin-Southampton Area Chamber of Commerce, Manry Rawls or Eddie Marks, who can be reached at 539-0505 or 653-2475.