Taking advantage of what would turn out to be some of the last good weather for a few days, folks in Chuckatuck put on an old-fashioned fall celebration on Saturday, as they turned out to mark the village’s first Founder’s Day.

At the Chuckatuck Volunteer Fire Department building on Kings Highway, old friendships were rekindled and new ones were made as past and present residents of the village, along with a good few from outside, enjoyed a variety of entertainment and activities. 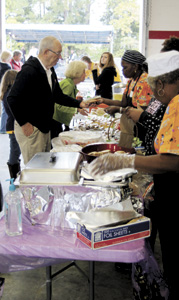 Visitors during Founder’s Day at Chuckatuck Saturday enjoyed good food, including barbecue and hotdogs, and music from the Rhondels at the Chuckatuck Volunteer Fire Department.

“This is the first one we’ve had,” said Drexel Bradshaw from the Greater Chuckatuck Historical Society, which sponsored the event from 11 a.m. to 4 p.m.

“We have had a good crowd; we hope this to be the first of many.”

The main entertainment at the fire department headquarters was classic beach music from The Rhondels, which had visitors up and dancing.

Children also were kept entertained with a bounce house, group games with the Girl Scouts and Boy Scouts, pumpkin carving and painting, and a decorated bike contest.

Folks from the historical foundation were on hand selling T-shirts, bags and copies of “Chuckatuck — A Crossroads in Time,” a book packed with interesting stories and historic photographs and which also includes a DVD.

From the fire department, many visitors headed to the Gwaltney store at the corner of Kings Highway and Route 10, where historical foundation volunteers were on hand to digitize black-and-white photographs for the society’s archives.

The old store, which is nearing the end of some major restoration work, was open for the day, allowing visitors to step back in time as they walked through the door.

The historical foundation uses a section of the building as an office. Several historical items were on display, including a Chuckatuck Indians jacket from Chuckatuck High School and an ancient-looking cash register.