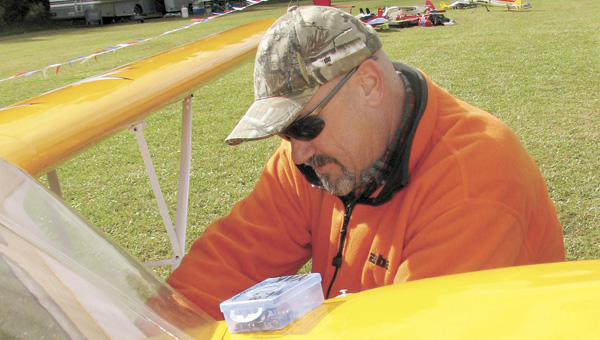 Bill Coada prepares to take apart his radio-controlled half-scale Decathlon plane to transport it home. He was one of about 60 pilots to visit the Hampton Roads Radio Control Club’s Fun Fly on Saturday, benefiting Toys for Tots.

About 60 pilots and dozens of spectators took part in the event, which included a raffle, awards and refreshments. The highlight, though, was a flyover by a slightly larger airplane than the ones trucked in by trailer and assembled on the spot.

Jerry Yagen, president of the Military Aviation Museum in Virginia Beach, piloted the restored P-51 Mustang, a World War II fighter, back and forth across the field three or four times before making one long trip around its perimeter and then heading back to Suffolk Executive Airport, where the plane is stored.

“It was quite exciting,” said Mills Staylor, vice president of the club.

Visitors at the event brought toys and cash to donate to Toys for Tots. About five large boxes of toys and $2,766 were brought in, surpassing last year’s collections, even though fewer people came out because of the chilly, windy weather.

“Considering the weather, we had a very good turnout,” Staylor said. “I think we did pretty well.”

Folks came from all around the area to participate, including members of radio-control clubs in Newport News, Williamsburg and North Carolina.

“A lot of club members put a lot of time and effort into this event,” said Staylor, also noting that many items had been donated for the raffle.

Guests said they came not only to “show off” their planes and flight skills, as Bill Coada said, but also to support Toys for Tots.

“A lot of kids don’t have what we have,” said Jeff Haywood, a member of the Hampton Roads Radio Control Club who brought his family to the event. “It’s not good to wake up on Christmas with no toys.”

If you missed the fun fly, there are still plenty of chances to help Toys for Tots. One way to do so is to donate to the Suffolk News-Herald Cheer Fund, which turns over every dime raised to Suffolk’s Toys for Tots program for the purchase of toys.