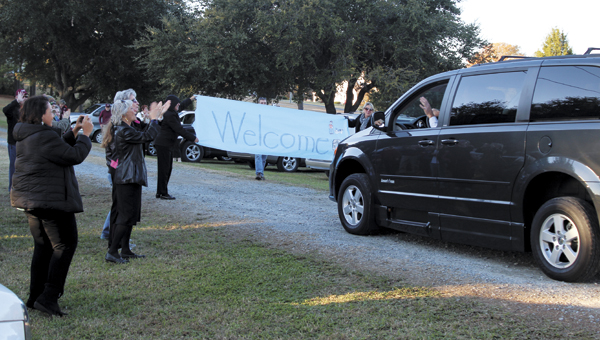 Dozens of emotional friends and family turned out for Lon Bickham’s homecoming in Chuckatuck Wednesday. Nineteen months ago, the brave Nansemond-Suffolk Academy graduate suffered burns to almost his entire body.

Family and friends of Lon Bickham welcomed the burn victim home to Chuckatuck on Wednesday after 19 months of rehabilitation.

Tears mingled with laughter as a few dozen folks gathered outside the family home off Route 10. They cheered as a charcoal gray Dodge minivan carrying Bickham, 32, pulled inside the gate.

“It’s nearly as good as the day he was born,” mom Carolyn Bickham said, hugging her son. “This is probably more momentous in some ways than bringing him home on the first day.”

The 1998 Nansemond-Suffolk Academy graduate suffered burns to about 94 percent of his body in an accident in Emporia on April 7, 2011.

Bickham was one of four men undertaking maintenance on a wood chipper when it exploded. One of them, Gary Pierce, later died. 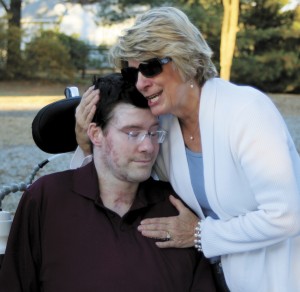 During an emotional homecoming in Chuckatuck Wednesday, burn victim Lon Bickham is hugged by his mother Carolyn Bickham, who said that seeing her son back home is second only to bringing him home from the hospital as a newborn.

It has taken multiple surgeries, involving grafts of cadaver skin, artificial skin and lab-cultured Epicel, grown from his own cells, for Bickham to finally make it home.

He spent 13 months in Virginia Commonwealth University’s Evans-Haynes Burn Center before transferring to the Sheltering Arms physical therapy and rehabilitation center in Mechanicsville in May.

Carolyn Bickham previously said that her son, who wants to walk and work, is worried about surviving without his hands, which were lost in the accident. But doctors have assured him he will get used to using just his thumbs, which were saved.

“What a Thanksgiving!” Carolyn Bickham exclaimed. “I was beginning to just think we were going to be in the hospital (for Thanksgivings and Christmases) forever.”

Lon Bickham’s father Ed Bickham said seeing his son back home is an amazing experience. “We’re glad to have him back in Chuckatuck,” he said. “We’re getting an early Thanksgiving — the day before.”

Lon Bickham, his faithful pooch Kassie excitedly running around the wheelchair, said he was surprised by the reception.

He said he was glad to be home with “my family, my friends and my dogs and cats. It’s good to be home.”

Bickham’s fiancée Raleigh Dowd was also at the homecoming, along with her father Tom Dowd and brother Cody Dowd.

Carolyn Bickham’s sisters Sandra Councill and Ellen Butler praised the Suffolk and Southampton County communities for the support they have shown the family through a difficult time.

“Lon has had the most amazing support system of anybody I have ever known,” Councill said. “We are very fortunate, because we are a close family, and sisters and cousins and friends have just been unbelievable.”

More than 1,000 people were served at a Nov. 11 fundraiser meal for the many costs associated with Lon Bichham’s return, Pam Saunders said. “It was just overwhelming,” she added.