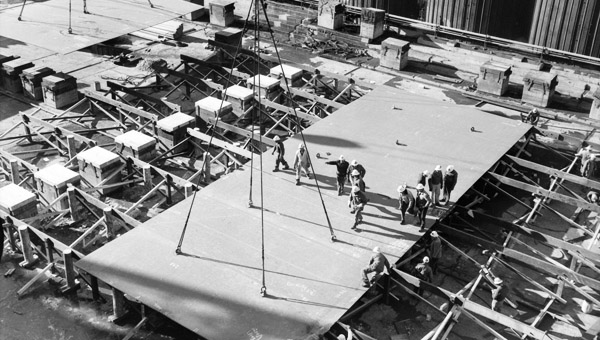 Workers lay the keel of the USS Enterprise, CVN-65, at a Newport New Shipbuilding drydock in this photo from the shipyard, taken around 1958. The carrier was recently retired from service. | Photo Courtesy of Huntington Ingalls Industries

Locals reminisce about their roles on legendary carrier

With the legendary aircraft carrier taken out of service, two Suffolk citizens who live a few miles apart in the Whaleyville/Holland area look back nostalgically on their time constructing and maintaining the “Big E.”

Jimmy Weaver, 72, who these days devotes his time to restoring antique tractors, recalls beginning work at Newport News Shipbuilding, where the USS Enterprise was built, in about 1962.

Wilbur Roundtree, 74, now fielding customers’ queries on stock feed and horse tack at Farmers Feed & Seed on South Main Street, says he first showed up for work at the shipyard in 1959. 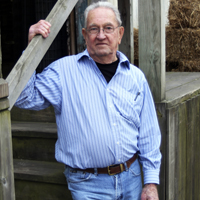 Neither attended the storied vessel’s inactivation ceremony at Norfolk Naval Station last weekend, but both are proud of their respective roles during the long and distinguished service of the Enterprise.

“It makes me feel old — that’s the main thing,” Weaver said of the carrier’s retirement after 25 deployments. “I hate to see them deactivate (a vessel) but they do what they have to do.”

Weaver, having just started at the shipyard, was taking a

welding class when management presented employees with a large photograph of the just-completed Enterprise.

“It was probably 1 ½ feet by two feet (and) framed,” he said, adding that every employee got one.

With America’s bombing of Hiroshima and Nagasaki to stop Japan — demonstrating the power of atom splitting — still fresh in folks’ minds, the nuclear-powered vessel was controversial when announced, according to Weaver. “Everybody seemed to be pretty up in arms about it,” he recalled. 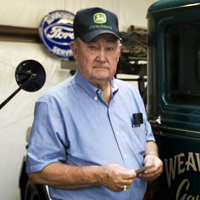 Former Newport News Shipbuilding worker Jimmy Weaver, shown here with his collection of antique tractors and vehicles on a farm near Holland, recalls helping refuel the USS Enterprise and a trip to the West Coast to repair it.

Weaver said he worked to refuel the Enterprise twice. “It took a long time,” he said. “You had to refuel those nuclear reactors” by lowering fuel rods into a compartment from above.

“It was dangerous. The shipyard took every precaution that could be taken, but still, when you are working with radiation, anything could happen.”

Roundtree says he was at the shipyard when the Enterprise’s keel was laid. Photos of this process show men in hardhats and overalls standing atop large steel plates being lowered into position with cranes.

“I was in the sheet-metal department,” Roundtree said. “I worked on the galley a whole lot. It was eight-hour shifts.

“I didn’t do a lot of work in the engine room — all my work was mainly up above.”

While Weaver says he’s unsure of what became of the framed photograph, Roundtree says he still has a commemorative Enterprise coin he and others were given when the carrier was commissioned in November 1961.

Another time Wearer worked on the Enterprise, he says, he was in a repair team sent to Oakland, Calif., putting up in a hotel for three or four weeks and working 12-hour days, seven days a week.

“When we went to California, we had to go up inside the steam generator,” he said, adding workers wore radiation overalls and special badges to monitor exposure.

“They only let you pick up so much radiation,” he said.

It was almost all work and no play, but not quite. “We took a day and went to Napa Valley and across the Golden Gate Bridge,” Weaver said.

Weaver traveled to California a second time on a nuclear-vessel repair mission, for the guided-missile cruiser USS Long Beach. “We did the same job on both ships,” he said.

“You couldn’t stay in there for long, depending on how much radiation you picked up.

It’s been a long time, but I remember it well.”

While the Enterprise was designed with eight reactors, Weaver says he worked on every one of the latter two-reactor Nimitz carriers.

But his Enterprise experiences stand out most. “I’m proud of it, I really am,” Weaver said.

Roundtree, who left the shipyard in the early 1960s to take over his father’s farm, says he has often reflected on his work on the Enterprise. “Once in a while I look back on it,” he said. “I did when I heard they were going to take it out of commission.

“I think it’s done its job and done its duty.”