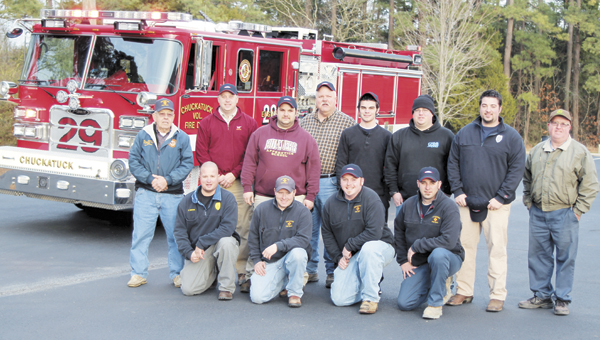 Members of Chuckatuck Volunteer Fire Department pose for a photo with the department’s new truck, a Pierce Arrow XT pumper that arrived Monday.

The department took delivery of the $540,000 Piece Arrow XT pumper Monday after it arrived from a dealership near Richmond.

“We started the process (of acquiring the truck) a little more than six months ago,” said Travis Dortch, chairman of the department’s apparatus committee. “(But) we have been constantly batting around the idea for a little over a year.”

Its retro styling is similar to the 1990 truck it replaces, which has been purchased by a fire department in North Carolina.

While the truck came from Chesterfield, it was outfitted at the Pierce factory in Appleton, Wis., and before permanently calling Chuckatuck home, on Thursday it will be driven to Maryland for further preparations, Dortch said.

It will be in Maryland for one to two weeks, and on return will go to Virginia Beach for the Virginia Fire Chiefs Mid-Atlantic Expo and Symposium.

“It’s going to be on display there … and then it will return here and we will put our final touches on it,” Dortch said. “It should be in service around the first of March.”

Dortch said the new truck has “a lot of bells and whistles that other trucks have, but there are a lot of things we put our own twist on to better serve this area.”

An example of the modifications, he said, is a lower cabin for tight spots.

The six-person truck also has features non-existent on the old truck to improve the safety of the fire crew, such as airbags and stability control.

The department, which relies on fundraising and donations, is paying for 55 percent of the new truck, with the city footing the rest of the bill.

“We’re proud to have what we have and it shows the citizens that we care,” Dortch said.

A community ceremony to mark the new truck is planned for the future, he said, adding that about 25 of the department’s 40 volunteers are trained driver-operators.

More pictures of the new truck are at www.cvfd9.com and on the department’s Facebook page.