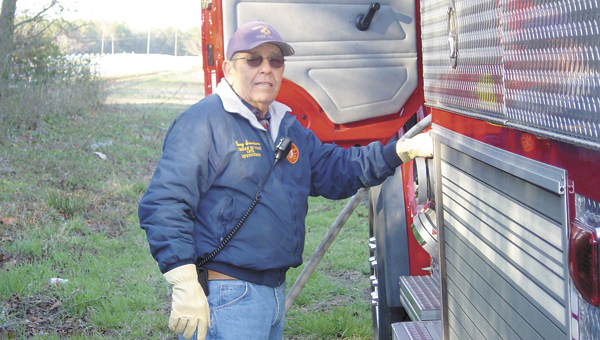 Jerry Saunders has been named Chuckatuck Volunteer Fire Department’s 2012 Firefighter of the Year. He was on almost four of every five call-outs and also plays a vital role in mentoring younger members, Fire Chief Greg Parsons said.

Chuckatuck Volunteer Fire Department’s 2012 Firefighter of the Year was on nearly 80 percent of the department’s calls last year.

Jerry Saunders, a 58-year veteran of the department who also won the award in 1971, 2002 and 2008, received the accolade during the community organization’s awards ceremony on Feb. 9.

He was on 238 of the department’s 310 calls, while Jacob Johnson and Aleck Winslow, also honored during the event at department headquarters on King’s Highway, were on 213 and 119, respectively, Fire Chief Greg Parsons said.

“I grew up with the fire department, and it’s just been one of my ways of contributing to the community,” Saunders said Monday.

“I’ve been interested in firefighting all my life. It’s a great feeling and a good bunch of guys. … It makes you feel good to see guys who start out in Chuckatuck going on to make careers for themselves” with other city fire departments.

Saunders, now a full-time volunteer with the fire department, previously served in the Air Force and has worked in heating and air-conditioning, ran the Saunders Supply Company lumber treatment plant for 27 years, and finally retired after an 8 ½-year stint at Lowe’s.

Parsons described Saunders, who has also served as fire chief in the past, as a mentor to the department’s younger members.

“It’s not only what he provides as far as emergency response,” Parsons said. “He’s been a good role model.”

His duties around the department include ensuring trucks are ready when the call comes, being on-site as much as possible to drive trucks to incidents, and “whatever I can do to help out these younger guys,” Saunders said.

He said he keep younger members interested and motivated and encourages many to pursue careers as firefighters.

“He’s (Saunders) a fixture of the fire department,” he said. “He’s here daily. Not only did he do the most calls, his contribution to the department is immeasurable.

“He’s here whatever the event, whether emergency responses, training, or just maintenance of the fire station.”

Saunders also helps out at department fundraising events, such as the annual fish fry coming up on July 8.