A doctor who served the Chuckatuck community for nearly six decades died Friday at the age of 92.

Dr. Philip Thomas had retired in 2011 from his medical practice in Chuckatuck, spending most of his professional years at an office on Kings Highway near its intersection with Godwin Boulevard.

Youngest daughter Katherine Youngk, who worked in her father’s office for 27 years, recalled her father as “the sweetest man I think I have ever known in my life.” 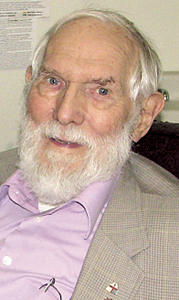 “He had the patience of Job,” she said. “He was just so sweet and so kind and very gentle. He wasn’t much for conversation, but you didn’t have to second-guess how he felt.”

Thomas was born in Richmond and always wanted to be a doctor, he said during a 2011 interview at the time of his retirement. He entered the College of William and Mary in 1939 to start his medical training, which was put on hold by World War II.

He served as a medic in the U.S. Army but was wounded by shrapnel in Germany. He received the Purple Heart for his injury and returned to school, later attending the Medical College of Virginia and interning at Norfolk’s DePaul Hospital.

He filled in at a practice in Whaleyville but soon decided he wanted to open his own practice. Others advised him to open in the Crittenden or Eclipse areas, but he insisted on Chuckatuck.

“I told them Chuckatuck is right in the middle of things, and that’s where I want to go,” he said in the 2011 interview.

Thomas also practiced at Obici Hospital for 40 years and was Chief Medical Examiner for Suffolk for many years. He estimated at his retirement that he delivered more than 2,000 babies. He was a member of St. Paul’s Episcopal Church and was named First Citizen in 1991.

Youngk recalled that her father, despite his rough exterior, was so compassionate that he couldn’t stand to discipline his children.

“He was just too soft-hearted,” she said. “My poor mom had to be the bad guy.”

He showed the same compassion for his patients that he did for his five children, she said.

“That’s why he chose the profession he did,” she said. “He had such empathy for people in their situations.”

Youngk said her father cared for his patients at any hour of the day, whether at home or at the office.

“He would get calls all through the night from people that counted on him,” she said. “He never told them not to. He let it be known he was available anytime, whether it was morning, noon or night.”

Youngk said her father would sit at people’s bedsides until both they and their family were comforted.

“I think he cared more about people than he cared about himself,” she said.

Thomas kept his gruff sense of humor to the very end. In one of the last conversations she had with him, Youngk asked her father, “Dad, what am I going to do without you?” She expected him to say something “sweet and profound.”

But instead, this is what she got: “I don’t know what you’re gonna do, but you better hurry up and get used to it!”