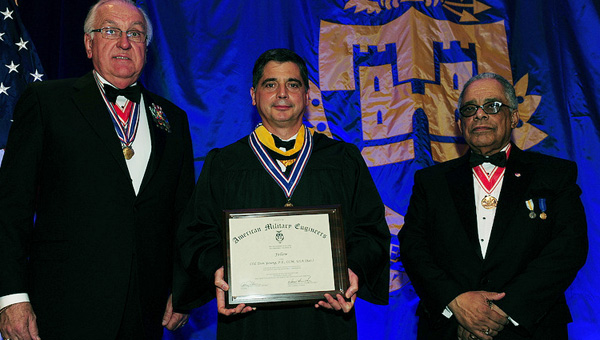 Don Young, center, was recently named a Fellow by the Society of American Military Engineers. Young is a vice president and regional manager of MBP, which has a major engineering contract with the city of Suffolk.

Don Young, vice president and regional manager for construction consulting firm MBP, has been named a Fellow by the Society of American Military Engineers.

To earn the designation of SAME Fellow, members must exhibit dedication and outstanding service to SAME and to military engineering. In addition, an important role of a SAME Fellow is to mentor young members.

“This honor is a reflection of Don’s perseverance to promote and facilitate engineering support for national security,” Senior Vice President Michael Prezioso said. “We are extremely proud of Don and his outstanding service to SAME and the engineering profession.”

Young is a retired colonel in the U.S. Army Corps of Engineers and has been an active member of SAME for more than 32 years. He has served as vice president for the Programs and Scholarship Committees and is an active Special Events Committee member.