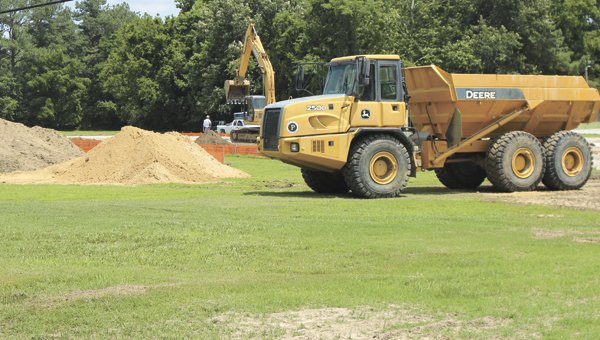 Work is getting underway on a new entrance to Lone Star Lakes. A new sidewalk as part of the project has been completed.

A new sidewalk into Lone Star Lakes from Chuckatuck already has satisfied customers, according to the city of Suffolk’s public utilities director.

About 1,200 feet long, the sidewalk follows Kings Highway around the Chuckatuck Volunteer Fire Department Building to a new park entrance under construction near Crittenden Road.

Moor said construction at the new vehicle entrance is ongoing as workers install stone base. “In the next couple of weeks they will be working on a turn lane,” he said.

One power pole will need to be relocated, Moor added, and he expects construction will be completed sometime in August.

“We’re really in the midst of it right now, with the stone and turn lane going in,” he said. “We expect to be started by the Fourth of July.”

The project will also involve installation of storm pipe, which is already onsite, Moor said.

“It was anticipated to be finished by the end of July,” he said. “We have had some utility pole relocations, and recently it seems to rain every day. When you are doing excavation work … it has an impact.”

But once the stone goes in, providing a firmer base, remaining work won’t be as affected by rain, he said.

When the new entrance opens, the current entrance to Lone Star Lakes, past the G. Robert House Jr. Water Treatment Plant, will close.

Meanwhile, another major utilities project is progressing along Route 10.

The two-phase project will deliver raw water from the Western Branch Pump Station to the Chuckatuck water treatment plant.

Phase one involves installing a 36-inch pipe from the pump station to a point about a mile north of Reid’s Ferry Bridge.

Workers have drilled a hole beneath the Nansemond River and wetlands, Moor said, adding that the process of pulling the pipe through, planned to start the end of June or early July, will be quite a spectacle.

Phase two will continue the pipe on to the plant. “We expect to advertise for that, for construction bids, in September,” Moor said.

The pipe project, due for completion in summer 2014, is by the Western Tidewater Regional Water Authority. Phase one is estimated to cost $3.8 million, and phase two is budgeted at $12 million.