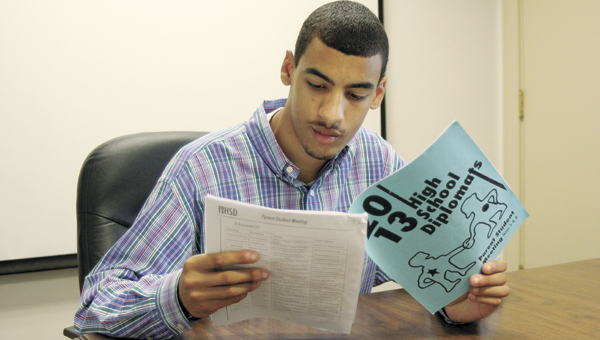 Aaron Dawley, a King’s Fork High School rising senior, has been selected as one of 40 American students to attend the 2013 High School Diplomats Program, where he will learn more about life in Japan.

Aaron Dawley’s interest in other cultures was piqued during middle school. At St. Matthew’s Catholic School in Virginia Beach, he became good friends with a South Korean student on foreign exchange.

“We bonded well together,” Dawley said. “I became his mentor and showed him around the school. We still try to keep in contact today.”

Now a rising senior at King’s Fork High School, Dawley will get the chance to make more international friends after his selection among 40 American students to attend the 2013 High School Diplomats Program.

The program takes place at Princeton University in New Jersey from July 30 through Aug. 10. A group from the American International Underwriters Insurance Company started the program in 1987, extending an invitation to high-achieving Japanese high school students.

Dawley will be paired with a Japanese roommate. Cross-cultural pairings allow students to “explore the similarities and differences of their respective cultures,” according to a program information booklet.

Each day has a different theme and begins with traditional Japanese morning stretches before classes and activities get underway.

“My focus is to learn about Japanese culture and try to connect their culture with our American culture,” Dawley said.

Dawley, an International Baccalaureate student and president-elect of his school’s International Club, said he has learned about Japan in history class, “going back to the Samurai and all the codes they had to follow.”

He learned about the program from a friend who had participated, he said. He completed an application online, and said he was “very excited” to learn of his acceptance. “Especially since there is such a small number of people going,” he added. “We’re taking a charter bus with others students from Virginia, Maryland and Delaware.”

Dawley said he is “very involved” in his church and school choir, and has been volunteering at Old Beach Farmer’s Market in Virginia Beach for the past two years.

He said he plans to attend college, and is considering studying marine biology and history there.

Beyond college, he said, “I’m still thinking about it. I have a few plans in mind, but I’m keeping my options open.”

‘Pieces of the puzzle fell together’