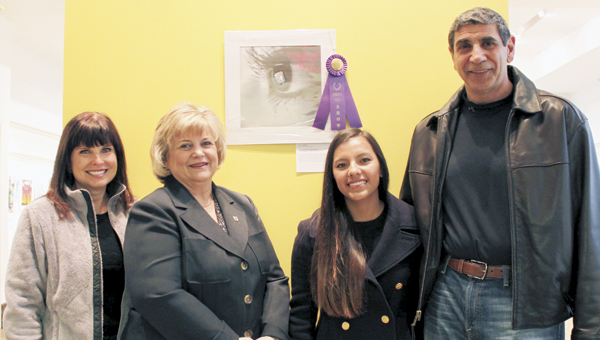 Grace Haddad, second from right, poses with her Best in Show-winning art, on the wall behind her, along with her parents, Mary and Lou Haddad, and Mayor Linda T. Johnson, who presented the awards in the Suffolk Sister Cities Young Artists and Authors Showcase at the Suffolk Center for Cultural Arts in March. Haddad and another Suffolk entrant, Kiraney Zhang, have been named nationwide finalists in the competition.

A digital artwork from Grace Haddad and an essay from Kiraney Zhang, an exchange student from China at the academy, will be on display at the Sister Cities International annual conference in San Antonio, Texas, in July.

The works then will embark on a year-long tour hosted by local Sister Cities programs on a monthly basis.

“We’re just thrilled to have winning entries,” said Kay Goldberg of the Sister Cities program. “Both of those entries were very fine, and we’re just very pleased they are winners.”

The showcase competition encouraged entrants to reflect on “The Power of Exchange” as a theme for their work.

“It’s wonderful,” said Haddad, a rising junior at the academy, upon finding out about her selection on Wednesday. “It feels really good. I never expected it, but I’m really glad it’s out there and people are seeing it.”

Haddad said during an earlier interview in April that she came up with the idea for her work by observing how much people depend on communication devices for interaction.

She took a photo of her own eye and enhanced it with the image of a computer screen reflected in her eye.

“My own life experiences look like a firefly, small and weak, but I think when more and more people love to exchange with each other, a lot of fireflies together will produce unimagined super power,” Zhang wrote in an email. “Although there are still gaps between countries, keeping to exchange ideas will develop more connections and understandings.”