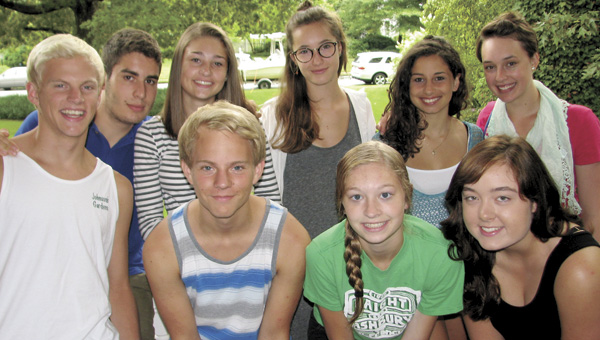 Colorful houses, a new way of eating cereal, medieval architecture, Pop-Tarts and the correct way to eat pasta were among the discoveries of a group of two teens from Suffolk and three from Oderzo, Italy, who recently participated in a cultural exchange sponsored by Suffolk Sister Cities.

This is the sixth year the two cities, joined in siblinghood because Suffolk benefactor and Planters Peanuts founder Amedeo Obici was born in Oderzo, have exchanged young people.

“It’s been great in both directions,” said Maryanne Persons of Suffolk Sister Cities. “This is a great group of kids, and they really got along well.”

The American visitors to Italy were Laura Smith, recently graduated as the valedictorian of King’s Fork High School, and Emily Bazemore, a rising senior at Nansemond River High School. It was the first trip out of America for both young ladies.

They returned from their two-week trip on Tuesday night. Each stayed with two host families for one week each of the trip.

“We basically just went where they went,” Smith said. “We didn’t change their habits; we just sort of blended in with them.”

Smith’s host families took her to see the sights, including Venice and Verona. In the process, she picked up on many differences in their way of life compared to America.

“It was like they intuitively know how to enjoy life more,” Smith said. “It’s much simpler, compared to here.”

Smith said the houses use plenty of natural light, and windows are usually open. There are no ceiling fans or digital clocks and very little use of air conditioning.

“They spend a lot of time outside,” she said. “It was like one big community.”

Bazemore’s host families took her to different sites so she could see the architecture, a topic she is interested in.

“Venice is magical,” she said. She also visited Burano, known for its colorful houses, and got to eat cantaloupe gelato. She also learned the correct way to eat pasta from her first host family after being with them only a couple hours.

As for the Italian visitors to America, seeing the nation’s capital proved to be a favorite for all three of the teens — Francesco Leschi, Martina Marelli and Laura Corona.

“I really enjoyed when we went to Washington,” said Leschi, adding that he enjoyed the Capitol and Lincoln Memorial.

Marelli confirmed the observations of her fellow Italians but also said she “enjoyed staying in the countryside” because it is “the real America.”

Corona discovered a new culinary treat — Pop-Tarts, which are not available in Italy — and Marelli learned a new way to eat cereal.

“They eat cereal in a different way than we do,” she said, explaining that at home she heats the milk and then adds cereal, rather than pouring cereal and adding cold milk, as in America.

The Italian visitors will return to Oderzo on Monday.

For more information on the adult or youth Sister Cities programs, call Persons at 539-7188.