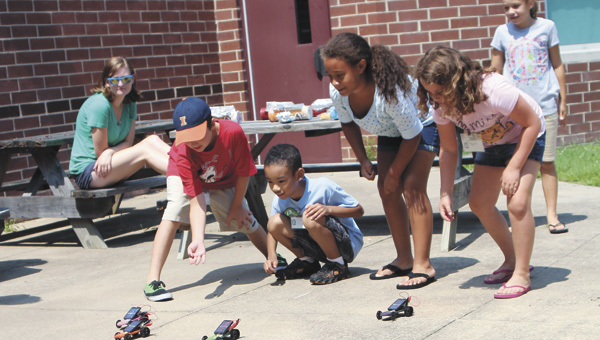 Roasting marshmallows over a campfire is fun enough for most kids, but kids attending the Tidewater Regional Governor’s School have been cooking marshmallows and hotdogs with the power of the sun.

The summer school is in session at King’s Fork Middle School, drawing 60 students from school districts in Suffolk, Franklin, and Isle of Wight and Southampton counties, coordinator Elizabeth Petry said.

Students are rising fourth- through seventh-graders, and the school is funded with a Virginia Department of Education grant.

It runs 9 a.m. to 3 p.m. Monday through Thursday, this week and again next week, featuring a host of hands-on activities that Petry said inspire a lot of enthusiasm.

“Our theme for the program is Force and Motion: It Isn’t Easy Being Green,” Petry said.

“The students are designing and building wind turbines, solar cars, roller coasters, testing magnetic levitation and micro-gravity in our own free-fall device, and doing a solar cooking investigation.”

Students arranged their hotdogs and marshmallows on sheets of aluminum foil spread inside an empty Pringles tube with one side cut out.

The food was covered with plastic wrap, presumably to keep the flies out, and set on a bench in the searing sun.

Teacher Elizabeth Littlefield, of Isle of Wight County Schools, said a hotdog takes about 30 minutes to cook using this method.

While the students waited to eat, they raced their solar-powered cars, lining them up on the concrete.

The micro-gravity exercise is another popular one, Petry said, explaining that they place things like water and different types of magnets in a container with a built-in video camera.

The container is dropped, and the video records the point at which the items inside reach micro-gravity.

“When you play it back on the video, you can play it one frame at a time,” Petry said.

The summer school brings together kids who share an interest in science but are from different schools and school systems, Petry said.

“I group them purposefully so they are with people they don’t know,” she said. “I think it’s an important part of the process, because they are used to being in classes where there are only a few people interested in science.

“This gives them a chance to meet other people and discover there are lots of other kids out there interested in science.”

They also learn to consider other people’s ideas and make compromises, she said. “The kids who apply and do these things are the top students,” she added.