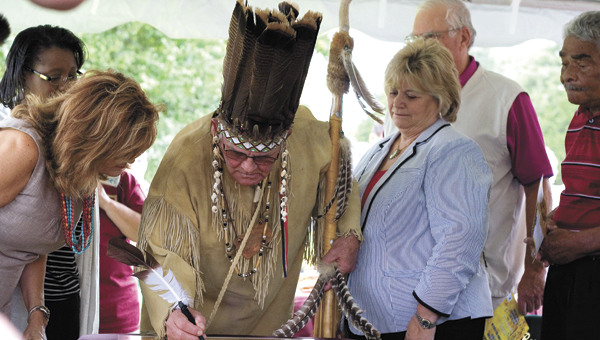 To the Nansemond Indians, the land where they have held their powwow each year for the last 25 years is sacred. The land is holy. The land is where their ancestors were born, lived and died.

And for the first time in centuries, the land is theirs.

Tribal members clapped, whooped and shook the jingles on their dresses and regalia on Saturday morning as Suffolk City Manager Selena Cuffee-Glenn presented Nansemond Indian Tribal Association Chief Barry Bass with the executed deed she said had been filed in Suffolk Circuit Court this week. 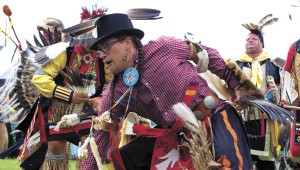 Dancers in the dance circle during Saturday’s Nansemond Indian Tribal Association powwow show off traditional dances for the large crowd that showed up. Rain dampened the occasion later in the day, but it continues today from 10 a.m. to 6 p.m.

“It’s like a weight lifted,” Bass said after the ceremony. “It means the world to us.”

The dedication ceremony, which also included the unveiling of a marker commemorating the land transfer, honored the transfer of more than 70 acres of land meant for a development called Mattanock Town. Named after the tribe’s 1600s village near the site, the educational tourist attraction will include a recreated Indian village, nature and hiking trails, museum and gift shop, a tribal center, powwow facilities and reburial grounds for Nansemond remains.

The tribe has been working on the project for more than a decade. In December 2010, City Council voted to order city staff to make the transfer happen, but a variety of delays — mostly related to the development agreement the city had asked the tribe to sign — ensued in the interim. But all the problems and delays seemed to have been forgotten on Saturday.

“Today is a momentous time in the history of this city, state and nation,” Cuffee-Glenn said during the ceremony. “Today we honor their history, their struggle, their courage and their journey.”

Mayor Linda T. Johnson, long a supporter of the project, called the ceremony a historic moment.

“I have never been prouder to be a part of the city of Suffolk than I am today,” she said, adding that it was one of the first times a municipal government in America had returned native land to a tribe.

“Nothing could be more important than what we’re doing this morning,” she said.

“It’s so good to see everybody,” Chief Bass said.

“I am so thrilled the city of Suffolk finally worked with these people,” said Violet Gomer, who was attending her first powwow in many years. “I love the Indians. I love to learn about their culture.”

To that end, the tribe will hold a series of educational demonstrations on Saturdays in September to show off some of the concepts that will be on display once Mattanock Town is fully developed. For more information on the events, watch the Suffolk News-Herald for an upcoming story and calendar listings.

The powwow continues Sunday at the tribe’s site at the end of Pembroke Lane, which runs off Godwin Boulevard directly across from Oakland Elementary School. The grounds open at 10 a.m., and grand entry of the dancers is at 1 p.m.

See more photos from the first day of the powwow on our Facebook page.