Bulldogs burst onto the scene

The King’s Fork High School boys’ volleyball team has seemingly come out of nowhere this season as a force, not only in the new six-school conference, but also the Southeastern District. Contributing to this sense is the fact the team was only 4-18 overall last season, but is currently 3-2. 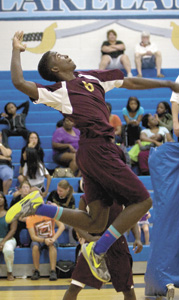 King’s Fork High School junior middle blocker Dale Roscoe lines up a kill during the Bulldogs’ straight sets win over host Lakeland High School on Thursday: 25-16, 25-17, 25-18. Roscoe has been one of the new players that has helped fuel the Bulldogs’ sudden success.

Many of the Bulldogs are inexperienced, but the team announced its presence clearly with a recent 4-set win over perennial powerhouse Great Bridge High School.

Though some say the Wildcats are having an off year, King’s Fork head coach Joseph Burns said, “They were a very good, solid team, and we were up for the game.”

Communicating his expectations for the team this year, Burns said, “Basically, the sky is the limit. It depends on the attitude that we have when we come in. It is possible that we could win the rest of the games.”

Confidence is running high among players, too.

With just five games under the team’s belt, co-captain and junior setter Cal Bailey made a confident prediction: “I expect to at least get the No. 1 or No. 2 seed in our conference tournament and go from there.”

There are challenges, though.

“Most of our players on the team have minimal volleyball experience, so taking these athletes and making them volleyball players” will be one of the biggest challenges, Burns said.

Team co-captain and junior outside hitter Aireon Leary said, “My expectations are for us to get better and overcome our fears and obstacles.”.

“I’ve been amazed at what we’re doing,” he said. “We have a full team of up-and-comers.”

While they do make youthful mistakes at times, they are making it difficult for Burns to decide who earns more playing time.

Two new players already making a significant impact are Brandon Hall and Dale Roscoe, outside and middle hitters, respectively. Burns said they are “really firing up our net play.”

Additionally, the team is already built for success next year. The current squad has five juniors, three sophomores, three freshmen and only two seniors.

Outside hitter Mark Kluck is one of those two seniors, who shares duty as a team captain with Bailey and Leary.

“Mark — his blocking technique is fantastic,” the coach said. “When he gets his hits going, he’s tough to stop.”

The coach praised his assistant coach Angie Gatling, who is Leary’s mother, saying “She has trained him well.”

“The athletic ability of our players can keep us in any game,” Burns said. “If we can keep our heads in the game, we can play with anybody.”

He said keeping an even keel on the court will be another team challenge.

The realignment putting Suffolk schools in a conference and region with teams of like size holds pros and cons for Burns. Negatively, he predicts traveling to play conference opponents in Newport News and Hampton will be expensive and “a royal pain” due to traffic. Positively, he likes how everyone will be guaranteed a berth in the conference tourney, allowing teams gelling late in the season to have a chance.

Burns admits he did not have his current season-ending goal in mind before tryouts this year, but he said, “I would like to have a record of no worse than four losses for the year, because I think we can do it.”