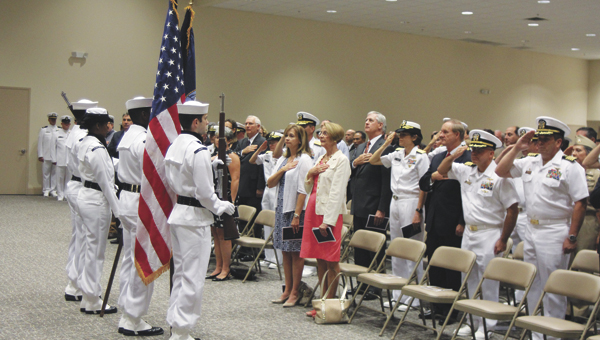 Guests say the Pledge of Allegiance at the beginning of a change of command ceremony at Naval Network Warfare on Tuesday.

A change of command ceremony for one of four Navy commands relocating to North Suffolk was an occasion for reflection and affirmation Tuesday.

Rogers and his family live in the naval yard where it occurred.

“It goes to show you that we live in a world of uncertainty, at times, when you never know what’s going to happen on any particular day,” he said.

Chandler, who led Naval Network Warfare since October 2011, said he felt “strongly” about the ceremony being held at Lake View Technology Park, rather than Joint Expeditionary Base Little Creek-Fort Story, where the four relocating commands are now.

At the Harbour View compound off College Drive, alongside Interstate 664, Naval Network Warfare and one of the three other commands, Navy Cyber Defense Operations, will occupy a building the Navy has dubbed Naval Global Network and Operations Security Center.

“We are excited about the opportunity to really design from the ground up a true global network and security center,” Chandler said.

The fundamental mission of activities and operations at the center is “keeping the Navy connected,” said John L. Donaldson, public affairs officer with Naval Network Warfare.

Prior to those assignments, and after he was commissioned in 1987, he was a surface warfare officer, and then transitioned to the information warfare community.

Members of Costello’s family flew in for the ceremony from various points, including San Diego.

Apparently with an eye for history, Costello noted the ceremony occurred on the 226th anniversary of the Constitutional Convention in Philadelphia, which “ratified the law of our land.”

The Navy marks command changes with pageantry because they signify the transfer of accountability and are “a reminder to all of us that the foundation of service in the U.S. Navy is responsibility,” Chandler said.

Costello said it was “truly my honor” to serve.