To sanitize or not

What expressions of creative genius students should and should not be exposed to is a fine line trod in art classrooms every instructional day. 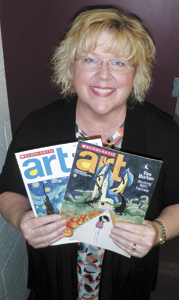 Darden, with some copies of Scholastic Art Magazine

Teachers might not want children exposed to images that could be seen as morally questionable or promoting something illegal. But at the same time, artists have always pushed boundaries, and too much paternalism could stunt students’ ability to understand art and grow as individuals.

While the dilemma is perennial for all art teachers, it’s just become even more prominent in the life of one from King’s Fork Middle School.

One of Sandee Darden’s first assignments as a teacher adviser for Scholastic Art Magazine, a ubiquitous journal in art classrooms, was to offer her opinion regarding Belgian surrealist René Magritte’s painting of a tobacco pipe.

The painting is titled “The Treachery of Images.”

“They didn’t want to seem like they were promoting smoking,” Darden said. “They wanted to know if it was an issue with instructors.”

Darden was recently selected as one of 10 teacher advisors to the magazine nationally from a field of 175.

She initially applied for the post with an ulterior motive: to receive a free subscription to the magazine for her classroom, after her budget last year was sliced in half.

“It’s a wonderful source for art history and to keep current on what’s happening in the art world,” Darden said.

But the plot soon thickened for Darden.

“When I started looking into it, I realized I was going to have a say and have input on what was included in the magazine,” she said. “It was a whole other level: being an art educator (while) contributing to my field.” 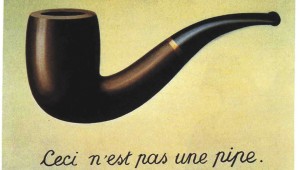 The pipe image on which Darden gave her first opinion for the magazine.

So when Darden was selected among 30 applicants for interviews over Skype, her competitive instinct kicked in. “I was just really hoping it came through,” she said.

The magazine is “super-savvy” when it comes to selecting images for publication, according to Darden.

“We want our students to be viewing things that are positive for them, but that also show the artists,” she said.

She gave the example of graffiti.

“Done in the right place and at the right time, graffiti is fascinating and a real eye-opener to popular culture,” Darden said. “However, there’s an element that’s illegal, and you don’t want to glorify that part of it.”

Darden said the edition of Scholastic Art Magazine for which Magritte’s tobacco pipe — or not — was under consideration is due out in January. She did not volunteer her stance.

“It’s going to be interesting to see what happens,” she said.