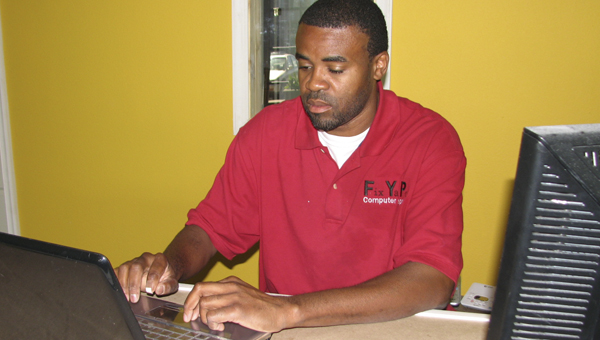 Jay Lewis works on a computer at Fix Ya PC at Freedom Plaza. He expanded the business from its former Gittings Street location.

Jay Lewis is hoping that opening the expanded office of his business on Friday the 13th will turn out to be an auspicious beginning.

Lewis recently expanded and relocated Fix Ya PC, which is now located in a 1,400-square-foot space in the Freedom Plaza Shopping Center on Burnetts Way off Godwin Boulevard.

It is a big step up from the 500 square feet he used to rent on Gittings Street, and he plans on doing big things with it.

Lewis started his career with 15 years in retail, 10 of which were spent in management. He was the computer-repair guy wherever he went. Most of the time, if a customer tried to return what they believed was a defective computer to the store, he was able to send them back home with their fixed computer in hand.

“I was always the technical-type guy,” he said. “It started out as a hobby, but after I lost my job in retail in 2009, due to some downsizing, I decided to start my own business and work from home.”

He did on-site calls for two years before he began renting retail space in 2011. His business now features in-store or on-site repairs of Mac or PC desktops or laptops, virus and spyware removal, network setup and troubleshooting, and remote assistance. He also will sell refurbished computers, computer parts and accessories.

“This is a great spot to be in,” he said, noting he has had several walk-in customers who saw the sign on the back of the building, which faces the busy Godwin Boulevard corridor.

Now that he has moved into a larger building, he also hopes to bring a unique feature to his business — an Internet café.

“The uniqueness of this, hopefully, will be a draw,” he said. “I think the café is going to be a big hit.”

The café will offer many varieties of coffee and tea as well as Internet access. He noted that visitors to patients at the nearby Sentara Obici Hospital might find it convenient if they need to have a few minutes to themselves.

“I just think it will be great for the area,” Lewis said, reflecting on his journey from unemployment to working for himself. “It was a blessing in disguise when I was let go.”