Since opening 40 years ago, Maureen’s School of Dance and Dancewear Shop has grown by leaps and bounds … and pirouettes.

It started off in Portsmouth before moving to its current Chesapeake Square location 26 years ago, founder Maureen Hannah said. 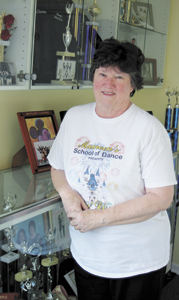 Maureen Hannah started Maureen’s School of Dance and Dancewear Shop 40 years ago. “I still love running the dance school and the retail shop,” she said.

“Now we have grown to 10 teachers,” said the 66-year-old, who has personally retired from teaching because of arthritis.

Hannah said she started the business as a main means of income while raising her three children.

She’d grown up in a small town in Illinois and taken lessons from a professional dancer named Evelynne Carter.

“I was a teacher assistant for her for years,” Hannah said.

When she started the business, Carter, who died about eight years ago at age 89 from a second bout of breast cancer, visited for recitals “maybe five times,” Hannah said.

“She was a sweetheart, and she was so proud of all this,” she said.

The business that first assumed a single unit at 4016 Portsmouth Blvd. has grown to dominate the entire building, with three studios, a retail section, an audio room and more.

Ballet, tap, jazz, hip-hop, lyrical, modern, pointe, musical theater, liturgical and “a little bit of acrobatics” are all taught at the dance school.

Jazz and hip-hop are the most popular, “because they like the music,” Hannah said.

“If we can get them here and they want to seriously study,” Hannah said, “they have to take ballet and learn the technique.”

“My teachers go to master classes and learn,” she said. “Some of them are dance majors from college.”

Maureen’s School of Dance will celebrate the 40th anniversary during its annual recital, which Hannah says she’s planning for Willett Hall on May 17-18.

She’s calling forth dance school alumni to share memories of their time with it, including “funny stories or recital stories, or let us know what they are doing now.”

“We want to know if they used their dance any way after they left here,” she said. ‘We’d like them to contact us.”

Some students are second- or even third-generation dancers at the school, Hannah said.

“Sometimes they come in and bring their children, and that’s kind of fun,” she said.

Hannah said she still loves running the dance school and the retail shop, which also sells online, shipping orders across the nation.