Singing Saints to perform at Scope 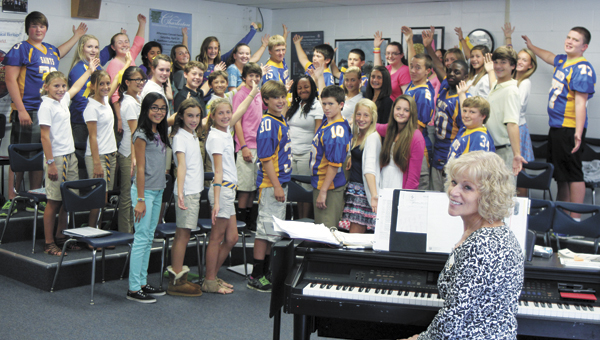 When the puck is dropped between the Norfolk Admirals and the Syracuse Crunch on Nov. 8, Nansemond-Suffolk Academy’s Singing Saints will lend some harmony to what promises to be a punishing encounter.

NSA is inviting its parents and the rest of the Suffolk community to come hear its middle school chorus perform the national anthem at the Norfolk Scope Arena at 7:30 p.m.

Choral director Toni Cotturone said it’s a great opportunity for the choir, comprising 44 members from grades six, seven and eight, to test its pipes before the general public.

“I was telling them yesterday, we really have to have this good, because on our own stage, people are forgiving, but when you are out in public” it’s a different story, she said.

“The Star-Spangled Banner” is always the first song Cotturone teaches her students, she said.

“It’s really important for them to know that song and be able to perform it,” she said.

Students start off singing the melody, she said, before working their way up to a three-part a cappella harmony.

“It’s not only building patriotism and honor of their country, but also building their ear as a singer and ability to work as an ensemble.”

Every year, the Singing Saints perform at a Veterans Day assembly at their school, Cotturone said, an event that involves the Lake Prince Woods Retirement Community.

“Any time I can get the kids out singing, I try to,” she said.

The upper school chorus sang at an arts festival in Savannah last year, she said, as well as opened a Mets-Phillies hockey game in Philadelphia a few years ago.

“They are not nervous yet,” Cotturone said of the Singing Saints ahead of their Scope performance. “That doesn’t hit them until they hit the stage. … They are probably more excited now about going to see the game.”

Eighth-grader Joey Shields begged to differ. He admitted to being “a little nervous.”

“I just want to show people that we can actually sing in front of a crowd,” he said.

Fellow eighth-grader Kate Lutz said, “I’m really excited because we have been working on ‘The Star-Spangled Banner’ for a while, and things are going to turn out really well.”

Penn Birdsong, also a member of the chorus from the eighth grade, concurred that the singers are well prepared.

“We are all really excited to show people that our school is advancing its choral program,” Birdsong said.

Red-level tickets for the event cost $12. For every ticket sold, $3 will be donated to NSA’s choral program.