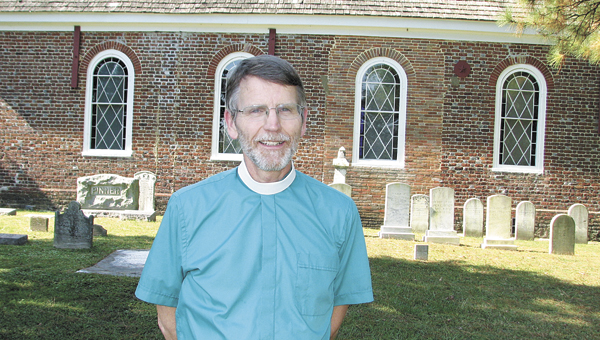 The Rev. Les Ferguson shows off the graveyard and historic building at St. John’s Episcopal Church on Kings Highway.

The early colonial history of many communities in the Hampton Roads area can be found in the earliest churches, provided they are still standing.

The Chuckatuck area is no exception, and St. John’s Episcopal Church is inviting the community to the church on the second Sunday of every month to learn about the history of the church and community.

The church and its graveyard harbor much of the history of the area. The bricks on the outside of the building, constructed in 1756, are engraved with the initials of early parishioners. A vestry book from the 1740s and a parish register from 1839 are still in existence and available for viewing during the Second Sundays events. The graveyard contains many of the most well-recognized last names of Chuckatuck.

“This is a historic structure that lives its history every day,” the Rev. Les Ferguson said. “We do have a rich history, and I’ve unearthed a lot of this information.”

Ferguson said he sees part of the church’s ministry as sharing the historical information it has with the community.

“One of the things we think is important for us is to provide a sense of integrity and unity within North Suffolk,” Ferguson said. “Even though we’re very diverse people, we come from very common stock.”

The church’s parish once extended from the Chuckatuck Creek to the Nansemond River and from Reid’s Ferry to the James River.

Its history is long and storied and includes the fact that Union troops stabled horses inside the building during the Civil War. St. John’s also is the only church in Virginia, Ferguson said, that still owns a glebe, or a farm that once supplemented the minister’s income. The church now leases the farm, and a portion of the proceeds support the church, Ferguson said.

The church’s history also includes a longtime sisterhood with Glebe Episcopal Church on the other side of the river, where the Kings Highway Bridge once connected the two churches. However, they split in 1998, and the bridge was declared unsafe and demolished seven years later.

The demolition of the bridge led to St. John’s sometimes being referred to as “the little church on the road to nowhere,” Ferguson said.

But he wants the community to realize that St. John’s isn’t just that little church on the road to nowhere. It holds the community’s history.

“We want to help the community be more aware of its history,” he said.

Second Sundays events at the church will be held from 12:30 to 3:30 p.m. on the second Sunday of every month. Those who would like to come for worship at 10:30 a.m. are welcome.