Jack Kress recalls his father as a classic small-town veterinarian — forever on call, working at least 12 hours a day, 365 days a year. 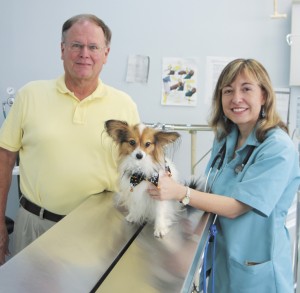 Joseph D. Kress “never closed the doors” of Kress Animal Clinic, which he established in a building on North Main Street where The Shoe Dept. now rests.

“We never, never went on a vacation,” Jack Kress said. “You could call him up 2 or 3 o’clock in the morning. We lived next door, and it was one telephone for the veterinary hospital and the house.”

Dr. Kress graduated from veterinary school at Ohio State University, Jack Kress said. He first came to Southeastern Virginia prior to World War II in his federal government job, investigating a disease that had hit the cow population.

“A lot of cows were dying or getting sick,” the junior Kress said.

Dr. Kress was drafted, but when the war was won he came back to Suffolk, “and that’s where he stayed.”

This year marks 75 years since Dr. Kress established the practice. In the early days, according to his son, he predominantly treated large animals — horses, cows, hogs.

“Small animals were a rarity,” Jack Kress said. “People couldn’t afford it and it wasn’t a priority. Out on farms, they wouldn’t vaccinate the dogs, and if they got sick it was just too bad.”

When Joseph Kress retired in 1985, his practice was taken over by Dr. Klemm. He rented the original building before Woody Kessler came on board. The pair moved the business to its present location at 110 Kensington Blvd., renaming it Nansemond Veterinary Clinic.

“It was kind of one of those small-world things” that he ended up buying the practice from Klemm in 1992, Kessler said.

For Kessler, moving back to Tidewater from Boston, where he had worked a couple of years for an inner-city practice after graduating from veterinary school at Tufts University, was a breath of fresh air.

“For one thing, I like the slower pace out here,” Kessler said. “We see a good diversity of pets … (and) we see different kinds of problems with dogs that are out and about, getting into all kinds of mischief.”

The practice plans to mark its three-quarters of a century with a weeklong celebration in early November. Jennifer Cochran — including Kessler, one of four veterinarians at the practice — said they’re planning things like “little giveaways,” balloons and snacks.

“We are looking forward to the next 25 years,” Kessler said.