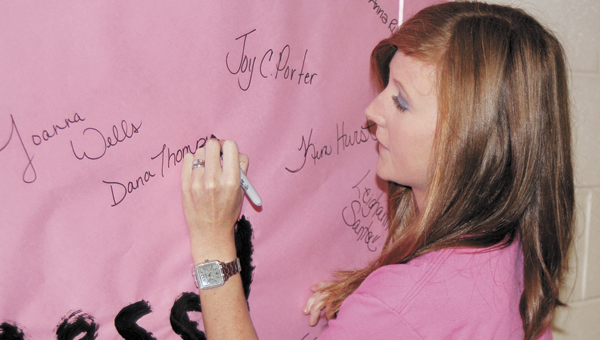 First-grade teacher Dana Thompson signs her name on a banner at Creekside Elementary School to raise awareness of breast cancer.

Faculty and staff at Creekside Elementary School kicked off a very pink campaign Friday that will raise awareness of breast cancer through the month of October.

Every Friday this month, almost 100 employees will wear pink shirts bearing the message, “All Alligators Wear Pink,” after the school mascot.

Teacher’s assistant Mary Keiser is spearheading the campaign, which she said is a “reflection on the staff members that we know are battling it — we just wanted to support them.”

Employees kicked off the campaign before the first bell by gathering around the playground for a photo op in their pink shirts and holding pink balloons.

Laura Johnson, another teacher’s assistant, said she had an aunt who survived breast cancer.

“I also had a best friend touched by it,” she said. “It’s very meaningful for me. That’s why I’m here — to show the love and support.”

Cheryl Hendricks, helping coordinate the campaign, said almost 100 shirts have been sold, and Farm Fresh donated the pink balloons for the launch, which afterward were placed around classrooms.

Faculty and staff signed their names on a large banner inside the school bearing the message, “We’re rocking the pink for breast cancer awareness.”

“In April, we are hoping to participate in the Relay for Life,” Keiser said. “There are a lot of personal connections (to breast cancer) here.

“There are a lot more cancers than just breast cancer, but this one has affected numerous people in our building because we are a mainly female crew.”